The Beauty of Vivianna Torun

When I visited Georg Jensen in January I knew nothing about Vivianna Torun. During my visit I was introduced to the story of this amazing woman and the beauty she created with her jewels.

Mobius Bangle- The Mobius Bangle echos the figure of eight that Vivianna Torun was so enchanted by.

Born in 1927, Vivianna Torun became the first silversmith in the world to gain international recognition.
Vivianna Torun did not have an easy life- she spent time as a single mother and lived through the war. She was particularly inspired by ice skating- the patterns the blades created on the ice, the inner balance required by a skater, the figures of eight. Her insight of the inner and outer blades- the sense of balance, movement and physical awareness enchanted her and this was has been echoed in her pieces.

Vivianna Torun believed “What is functional is also beautiful” and used this in all her designs. Instead of hiding a catch on a necklace, it was made a focal point.

Torun began to play with silver and was apprenticed to Dahlgren and Co in 1945. In the midst of the celebrations of the war’s end, Torun became pregnant with her first child Mia. She started attending Konstfack, the School of Arts, Crafts & Design in Stockholm, where as she had no one to mind Mia, she would park the pram beside the principal’s car while she took classes.

Vivianna watches, Neck rings and Dew Drop pendant by Ms Polka Dot. Vivianna’s neck rings allow the fastening to be the focal point of the design ” What is functional is also beautiful” The neck rings also allow for beautiful stones such as the Dew Drop Pendant to be hooked onto the fastening allowing for a different look.

Having traveled and lived extensively throughout Europe, Vivianna eventually setup a workshop in Biot, France. It was here she was able to make a success of her work designing pieces for women such as Billie Holliday, Bridgette Bardot and Ingrid Bergman.

Vivianna designed pieces for the working woman. Her desire was to create for those who were independent, who wanted versatility and beauty in what they wore. Torun wanted women to be able to wear their jewels while hanging the washing but be an extension of the beauty of the female form. To her, the pieces are supposed to show the inner beauty of a woman and not be defined by a man.

Her most famous piece, the Vivianna watch was designed out of a particular dislike of the piece.  Hating the relentlessness of time, Vivianna Torun designed a piece where the band was open ended. The wearer thus not being a prisoner of time.  The original piece had no numbers, no hands and the face was a mirror- a reminder whenever you looked at it of the present moment, the present second.  The watch became the very first piece Georg Jensen put into production when they took over the production of Vivianna’s pieces in 1967. The watch now has a quartz movement with an hour and minute hand. It’s available in a range of metals (include old and black coated stainless steel) and with diamond accents and even a limited edition diamond encrusted face.

Vivianna last visited Australia in 1999 for an exhibition of her work.  Vivianna was always grounded. She had no hesitation in climbing high ladders to ensure banners were perfectly straight and when customers commented on their necklaces not sitting properly, Vivianna took to them with her own two hands and molded them to sit beautifully on the lady.

In 1974, Vivianna was led to Indonesia where she set up a new workshop. It was here that she continued to design beautiful pieces until her death in 2004.

Her long and illustrious career was marked with a plethora of accolades and awards- including being invited by Picasso himself to exhibit Musée Picasso Museum in Antibes in 1958 and the Lunning Price and Gold Medal at the Triannial in Milan.

You can view Vivianna Torun pieces online at the Georg Jensen website or visit their stores to see the pieces in person. 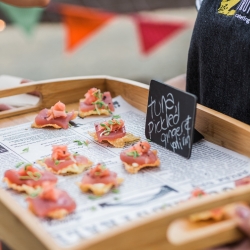