Image via The Bendigo Art Gallery

The regional city of Bendigo and their extraordinary Art Gallery manages to attract some quite magnificent exhibitions. Not so long ago they attracted the Masters of Couture exhibition and at the beginning of next year they are having the Grace Kelly – Style Icon exhibition from March until late June. At present, however, they are hosting an exhibition near and dear to our hearts – The White Wedding Dress.

Celebrating 200 years of the White Wedding dress this exhibition is showing, in conjunction with the Victoria and Albert Museum, London, wedding gowns from the early 1800’s until today. It may not be widely known that Queen Victoria popularised the wearing of a white gown for weddings when she married Prince Albert, the Duke of Sussex and younger son of a German Duke in 1840. Prior to this the bride wore her best dress and accessorised that for her nuptials. Victoria’s bold statement in white started the trend which in some ways still continues today. Though now not necessarily white, the wedding dress has it’s own unique place in culture.

There are some stunning gowns in the collection and none more so than the gown worn by socialite Margaret Wingham in 1933. Designed by the famed designer of the time Norman Hartnell it was radical for the age and featured a bias cut skirt with long flowing sleeves and enormous 6 metre train. This gown, with a bit of modernisation, would not look out of place on a bride today. Timeless elegance like this is what my designing is all about and it gives me great inspiration to see gowns like this.

There are many more beautiful gowns but the other one that gave me inspiration and it was a joy to see was Gwen Stefani’s John Galliano designed gown. In striking white vignetting into striking pink. This gown is the epitome of celebrity style to me. It was simple yet elegant with just enough Rock Star pizzaz.

Also featured is Deeta Von Tease’s Vivienne Westwood gown for her marriage to Marilyn Manson. This one you will either love or hate … I reserve judgment personally.

The other polarising gown featured, though only as a large photo, is Princess Diana’s gown. This gown in it’s time was ground breaking. Love it or hate it it moved bridal fashion forward in leaps and bounds. I was just starting my designing career in 1981 and everything in the day was shiny satin and lace motifs. We thought it was beautiful then but looking back it was truly hideous. Diana’s gown was in raw dupion silk which was a very brave decision by the Emmanuels, the couple who designed and made the gown, and it was relatively lace motif free. As I say this gown really was a vast step forward and heavily influenced design well into the 90’s. I can’t tell you how much dupion silk we used in that time but it was enormous.

Ms Gingham says: It really looks like an amazing exhibition. Imagine having all that attention on you for your wedding day! The pressure to get it right!


About Wendy Makin: Wendy Makin is recognised as one of Australia’s best Bridal Wear Designers. Celebrating 30 years as a designer, Wendy has a real passion for Brides and Bridal Gowns and has shown this through her many awards for design and service. Believing that bridal gowns should be timeless and elegant her signature of simple styling with quality fabrics is easily recognised.

For more pictures of this fabulous exhibition go to The White Wedding Dress Facebook Page. 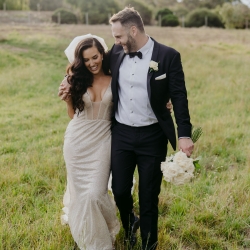