Weddings are funny things. I am so pleased we have such a plethora of beautiful photography that has documented our special day, because I fear that without it I would remember very little before 7pm of that night. For those of you who are married you will probably understand this quite well, for those of you who aren’t yet, the following story may elaborate a bit…

The night before, my bride to be CJ and her bridesmaids stayed at a beautiful little cottage two minutes around the corner from our home called Glen Harrow in the Dandenong Ranges, which allowed them all some time together and the full morning to get ready and get a loving start to the day. Meanwhile, I was at our home, child free and spent the final hours scrambling around making final adjustments to décor and seating, sweeping, moving metric tons of gravel to form some semblance of a driveway, ice, signage and all other manner of things you don’t realize have to be done until the time.

We had a very special friend of ours who runs a local café Magpie Café Upwey rock up at 10am to begin the catering for the day in her bright yellow 1959 Morris Minor. Up until this moment, CJ and I had decided to not have any kind of ‘wedding car’ and thought it was a little bit silly, however once Nicole made the offer, it was too cute not to borrow.

My groomsmen arrived, helped out with any last minute things, like filling vintage suitcases full of homebrew for ‘favours’ and setting up the bar and then we headed to Glen Harrow to meet the girls.

We arrived at Glen Harrow to CJ, the bridesmaids, CJ’s mum and Linda our friend and photographer from Bluehouse Studio, champagne in hand and shooting away. We had made the decision to do all of our ‘official’ wedding party photography prior to our ceremony so we could stay and enjoy the party. We are so glad we did in the end, it meant we had a solid two hours to get some great photography without feeling rushed to get back to the guests.

The time had come, we had to actually go get married! It’s an indescribable feeling of joy, anticipation, excitement, fear and vulnerability. We hopped into the car, my best man behind the wheel and my heavily pregnant bride beside him, unsure if the little yellow Morris could make it the 1km drive up the steep hill back to our house where all the guests were waiting.

We had a local gypsy band ‘Lark’ playing before we arrived to get our guests feeling nice and festive and our beautiful friend Kate Crowley played an acoustic version of the Lamb song ‘Gorecki’ as we walked in. It was the longest 30 metres I’ve ever walked…

The ceremony was lovely, people cried lots, we cried a little, laughed a little, a few hankies were passed to CJ throughout the ceremony, vows were said and hand fasting knots were tied. We thought a lot about the many different traditions that we could include in the ceremony but felt a real resonance with the concept of handfasting. It’s nice these days to be able to take a very old tradition and interpret it your own way. We decided to use 3 cords, 1 black velvet representing me, 1 ivory lace for CJ and 1 green cord representing our children.

Another ritual our celebrant told us about that we decided to include was a ‘warming of the rings’, where our rings were actually passed around to each of the guests during the ceremony to imbue their energy and blessings before we exchanged them.

After a few formal shots of the family and friends all was very casual from then on. We have never been very into order, so it was simple, fine finger foods, wine and beer, Lark played again followed by more very special friends Hiatus Kaiyote. A little later on we had a few speeches and our very special custard tart wedding cakes made by the local patisserie Chocolate Sensations and my dad, my groomsmen and I indulged in a cigar.

One of the most special moments of the day was our dance. It was not planned, there were not even many people looking, and it was raining. But CJ and I got one song together, that had been specially learnt for us by the band as a surprise, Billie Holliday’s ‘The very thought of you.’  A single polaroid was the only captured moment of this, and for me, I love it this way. A blurry, unknown shot of us in that moment which holds as much power to it as the crystal clear shots of us earlier. No one wants it to rain on their wedding day, but ultimately any disappointment we may have felt was so outweighed by such a precious memorable experience that we never would have had.

At about 7pm, CJ and I found ourselves sitting next to one another (for what seemed like the first time all day) on the deck , and had the dual realization ‘we’re married now!’. I think this was the re-entry point back to our bodies, as for the previous 6 hours we both felt as though we were watching the event from some corner far away. Shortly after we left the party and went back to Glen Harrow, and promptly passed out. I can’t imagine the ‘wedding night’ is quite what it used to be for the modern couple!

There’s no doubt about it, even if you want to try to keep it simple, weddings are a lot of hard work! It was very much a D.I.Y affair, we spent 4 months renovating our garden, made the rings, all the outfits, the beer, the bunting, the cushions, invitations and anything else we could. The day lasted approximately 12 hours, of which we really felt aware of about 4, but to share such a special day, with the people who matter most to us in this world was worth doing every second of it, twice over.

People often ask us why we felt the need to get married, and when I think about it, it is a gift to one another and a public announcement of commitment, but it is also an opportunity to solidify families, friends and community, and to hold an event that everyone walks away from feeling happier about the world. That’s pretty special.

Ms Gingham says: Custard tarts!!!! Mmmmmm… my favourite! Such a great alternative to the traditional cake or cupcake! It’s so fantastic to see this wedding come together after we’ve followed Brent and CJ’s story for these past months! Congratulations on a stunning wedding guys!

Brent says: “I’m that guy with the absurd ideas, the only difference is that I end up making them happen. I’m young but feel very, very old. My partner and I met three years ago and within that time I started my own jewellery business, we have had a son who is now 18months, CJ is 18 weeks pregnant with the next, we moved to the forest and bought a home, opened up a fashion retail store, Limerence, that stocks only handmade and Australian items, and are now getting married. Our mother’s joke that we won’t have anything left to do for the next 50 years. I make jewellery, practice graphic design, I love my wine and my music collection and in general, when I get a moment to think about it, I love my life.”

Read about Brent and CJ’s journey in the lead up to their wedding here. 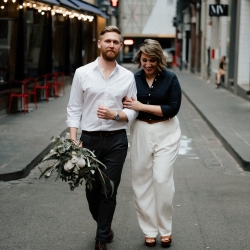