It was a delight to share the modern Tasmanian wedding of Kristy and Josh showcased on Polka Dot Bride recently and I had to crack a laugh when Josh mentioned why they chose MONA to exchange their vows.

“You may or may not have heard of MONA. But I was pretty sure today there would be a naked celebrant, a vagina adorned bridal dress and a swapping of bodily contents instead of vows. I was very surprised to see none of this happen.

MONA is the brainchild of David Walsh, a mathematical genius and gambler who has developed computer software algorithms that whirl away in the background beating the odds, and keeping the cash flying in. He has spent close to 200 million, mostly on his art collection and museum.

Set on the banks of the Derwent River, the museum descends beneath the earth and cuts into a 14 metre sandstone cliff. This is Walsh’s subversive Disneyland. A smorgasbord of inciteful, graphic and horrific displays including 99 vaginas are designed to draw a reaction out of you – purest emotion. To make you confront things you would usually avoid. David Walsh has created a temple to secularism that focuses on sex and death. And rumour has it that he lives at the highest point in the museum and watches all beneath him moving through this adult playground.

So why would we choose this place? Well it occurred to me while I was gathering information about the origins of our spectacular relationship. I got plenty, but at the a similar phrase along the lines of “actually we probably can’t use that”, or  that it might not be appropriate for the wedding.” 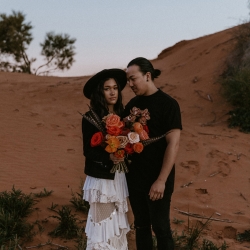