Terry and I are high school sweethearts and have been dating since we were 15 years old – we share love of travelling, friends and our puppy, Madden. True to our love for travel, (34 countries and counting) Terry stylishly proposed in Central Park, New York –My favourite city in September 2009. Although it almost didn’t happen as he wanted to go up the empire state building even though we have done it in the past, I kept saying ‘no’, finally he gave up and proposed in central park – A question I screamed ‘yes’ too!

My dress was a custom made Maria Gonzalez Couture gown. As a gesture to my late father I carried a photo of him on my parent’s wedding day band inside my flowers so no one could see but I knew he was there with me. I wore an “evil eye” attached to my dress as good luck in Greek traditions. We also had a Greek orthodox crowning ceremony at our catholic ceremony in honour of Terry’s mother.

The venue was black and white and this was mixed with silvers, charcoal, blush, iced pink and peonies. All 26 tables were each named after a place we had been. From New York to Brunei to India and Italy and everywhere in between. Pink and White roses filled the tables and pink, black, white and grey Large white and pink David Austin and Peony roses in different shaped vases and jars filled the lobby, with candles and the table names and seating charts. We mixed traditions  and enter to the loud and upbeat bang of an Arabic drummer, it got everyone up and dancing. To add to our culture mix and that of our families we played Arabic, Greek and offcourse some good ol’ Australian music.

A couple of highlights of the night were when at midnight we had a toast in honour of our 12 year anniversary and my younger sister and bridesmaid performed at our ceremony singing “Even when I’m sleeping” by Leonardo’s bride.

Images by Dezine by Mauro

Ms Gingham says: Gorgeous gown!!! I love the glamour theme of this wedding so much!

Jasmin says: “We are high school sweethearts and have been dating since we were 15 years old – we share love of travelling, friends and our puppy, Madden.” 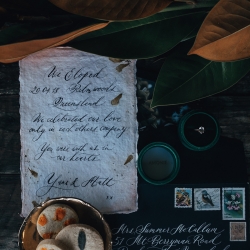