Nothing sounds better than escaping right now to a tropical island for a wedding- so it’s the most wonderful time to show off this gorgeous Destination Fiji wedding captured by Jonathan Ong.

Erin tells the beautiful story of how they came to be. “We were childhood friends, met at the tender age of 10 and 13 (I’m the younger of the two), we mixed with the same group of friends and saw each other almost every weekend. We were both born and raised in Fiji and our families were very close growing up. The families were always going somewhere together – camping, on boat trips, sailing regattas, surfing comps. He was one of my first crushes. We both liked each other but never pursued the idea of dating since he was my brother’s best friend.

He was the first person I ever kissed in a game of spin the bottle and the first person I ever slow danced with on a dare. I left Fiji to finish high school in New Zealand and he enlisted in the Royal Australian Navy coincidentally in the same intake as my brother. We always kept in contact and would see each other when we went home to Fiji to visit family. The Navy posted him to Western Australia and I moved to Brisbane to live near my sisters and start a degree at Uni. I hadn’t seen him in two years then he, his identical twin brother, my brother and a friend decided to come spend New Year’s with me and my sisters in Brisbane, due to the recent coup in Fiji and given their military status they weren’t allowed to fly back home.

At 19 years old, I was no longer my brother’s little sister and he was no longer a skinny young boy but a tall handsome man. We realised there was a spark still between us and that’s when the love affair began. After almost four years of dating we had our first child, Kelaela who was flower girl at our wedding and we are expecting our second daughter in November this year. ”

Erin chose a gown by Lisa Gowing while her bridesmaids wore tangerine coloured gowns from Shieke.

“We almost lost the wedding rings – that was heart failure central. As we left the room to make our way to start to walk down the aisle, my older sister was holding the shell with the wedding bands in it. She was just about to say I think we need to put these bands in the box because the shell is too smooth then she dropped her camera and went to catch it but flung her hand that was holding the rings and they flew over the side into the bush. Lucky we had our warrior escorts with us – they jumped over into the bush and managed to find the rings – I have no idea how!”

The couple held their wedding and all of the festivities at Volivoli Beach Resort. Erin explaining, “All of our guests stayed at Volivoli Beach Resort and arrived a couple of days/week before the wedding to relax in the sunshine before the wedding. We filled the whole resort and the overspill went into the two neighbouring resorts. It was so easy and relaxed because we got ready in the rooms, walked to the beach for the ceremony and had the reception in a marquee by the beach. No one had to rush home and we had a courtesy bus for those staying in the neighbouring resorts (driven by an uncle so it was on standby at all hours).”

The wedding was all about family and friends, Erin remarking, “It was a family affair from the start. Anyone who could help decorate, lift, cook, style or look after children was recruited. Lyle and I both have big extended Islander families and everyone was more than willing and happy to help make our day special.

My daughter (Kelaela), my niece and two nephews were the flower girls and page boys. Lyle’s twin brother was his best man, the rest of his groomsmen were his younger brother, my brother (who is his best friend) and a friend who Lyle was best man at his wedding. My maid of honour was my best friend who I have known since we were 12, my other bridesmaids were my cousin and two other best friends (who I’ve also known since I was 12). My bridesmaids – we all met in an island dance group at age 12 and have been friends ever since.”

Erin walked down the aisle to “Somewhere over the rainbow (the Israel Kamakawiwo’ole version) played and sung by a group of three local boys on guitar and ukulele. I had both my mum and dad walk me down the aisle and was led halfway down the aisle by Fijian warriors (supplied by the resort). ”

Erin remarks, “We loved including all the little touches that made it not just another beach wedding in Fiji but a wedding that weaved in both my husband and I’s Fijian culture, the woven Fijian fans and shells we gave to guests, the hand woven baskets the flower girls carried, the warriors walking me down the aisle, the band playing Fijian and reggae music, the celebrant getting the names and words wrong, everyone getting up and doing the tui boto (like a massive conga line but Fijian style) all throughout the night, the traditional Fijian food – the list goes on.”

Malelili Flowers created the floral arrangements for the day, Erin remembering, “He is an old Fijian man based in Nadi who services all the resorts and all of his staff are from his village.”

“I ordered giant round coloured confetti (about 5cm) to be thrown as we walked down the aisle – it looked amazing in all the photos because the circles were so huge!”

Of their photographer, Erin says,  “I first saw his work when he photographed the wedding of a close family friend and it was love at first sight. He was the person I wanted to document my day because I felt he captured everyone’s character and emotions perfectly – all his shots highlighted the natural beauty and that’s what I wanted.”

There were a few handmade colourful touches, says Erin,  “I made a few of the signs to put up around the place. ‘You Are the Peanut to my butter…’ , Photo booth sign and ‘Eat Drink and Be Married’, the cards/wishing well suitcase and a good friend drew our Wedding Guest Book fingerprint tree which we later framed. Everyone had fun putting their finger print on the guest book finger print tree – one uncle had a bit too much fun and decided to draw a boat (not sure where he was going with that). It makes for a funny story now because everyone asks about the boat when they see it.”

Of the speeches, Erin recalls,  “The speeches were pretty funny – the best man told the story of him catching Lyle and I making out on the couch before anyone knew we were dating – that was embarrassing but very entertaining. My father in-law was a little bit tipsy and in his marriage advice part of his speech, started comparing marriage to coastal erosion – we’re still not sure where he was going with that (he’s a marine geo physicist).”

” We had a massive white chocolate rainbow cake with cream cheese icing made my by cousins as well as little white chocolate cupcakes with frangipani flowers. The bridal party entrance into the wedding reception was great because all the individual personalities came through – all the entertainers and jokers were in their element.”

Of their first dance, Erin remembers “We danced to ‘Baby I Love Your Ways’ (the reggae version) It was the song we played on repeat when we first started dating and the song that comforted us when Lyle had to travel with the navy. Then half way through our slow dance the music changed and we broke out into a Fijian Meke/Samoan Siva and our bridal party joined in.”

” Everyone danced and danced until day break the next morning. There were many many dance offs. We had a sand dance floor so everyone was either bare foot or in flip flops.”

Friend of the couple and freelance videographer Scott Gibson captured this film of the day.

Congratulations on your marriage Erin and Lyle! Thank you for sharing your day with us! Thank you to Jonathan Ong for sharing today’s wedding with us! 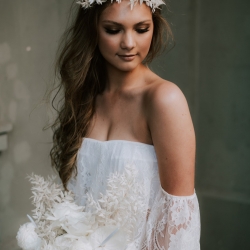