Wedding Traditions: Something, Something

Unlike the Chinese traditions, we’ll only have a few key “Western” traditions for our wedding. This post isn’t necessarily for those wanting to know about it, but more for those interested in knowing, as these traditions are pretty ‘common’ in “Western” weddings:

This is a quintessentially Western tradition and originated during the time when arranged marriages were common. The betrothed couple weren’t allowed to see each other as marriages during this period (read: the Medieval land-owning period) were mostly seen as a “business deal”. The father of the bride wanted his daughter to marry a rich man, but feared that the groom would annul the marriage if he saw the bride before the wedding because he thought she was too unattractive. The veil that a bride wears served a similar purpose.

Nowadays, this tradition is less about the fear that the groom wouldn’t want to marry the bride, and more about the fact that it’s a “tradition you must have” and it’s bad luck to see the bride before the ceremony. It’s believed to add to some sort of excitement leading up to the ceremony. However, more and more couples are doing a “first look”, or seeing each other pre-ceremony to take formal bridegroom portraits.

The reason we’re keeping with this tradition is because GP’s mumma really feels we should follow it. It’s basically the only tradition she seems to want to use, so I’m more than happy to oblige. This is why GP will be blindfolded during the ‘auspicious time’ tradition mentioned in my previous post, so he can’t see me before the ceremony. We’ll also, hopefully, be getting pretty pictures of a blindfolded and suited up GP and dolled up moi in her white wedding dress.

This is a tradition which I’ve been struggling with and have only recently figured out. Let me explain more…

So, everyone has heard the rhyme:

And a sixpence in her shoe

I won’t be bothering with the last line, since it’s not a common part of the poem that most people know of, but I’ve been trying to think of my “somethings”. “Something new” is an easy one – my dress, my veil, my shoes, and more. In Chinese weddings, it’s customary to buy “new” things, so most of my attire will be brand-spanking new! My ‘something new’ was therefore a no-brainer.

My “something borrowed” is a necklace belonging to my ma, Mama eichanist. It’s a silver necklace which has an almost yellow sheen to it, to match the yellow gold of my ring. Here’s a picture:

I tried on the necklace and it’s gorgeous. It complements my skin tone, as it has a soft yellow sheen to it, and will look perfect with my dress! I can’t wait to wear it on the Day.

Now the last two were the difficult ones.

As my mother was wed in Indonesia, and her wedding was mostly controlled by an overzealous mother-in-law, she didn’t get to buy a wedding dress or anything that could be considered sentimental. As a result, I don’t have anything from her wedding but the pictures. So my “something old” was difficult to pinpoint.

As for my “something blue”, I had no idea what to use! The ideas ranged from a garter, to a Portal charm to hang off my bouquet, to an earring for my second piercing on my left lobe. All of those meant I had to buy stuff though, and I couldn’t bring myself to pull the trigger on those ideas.

Today, however, after chatting with Mama eichanist about different traditions, she mentioned that she may have something which might prove useful.

It’s not what most would consider “old” (it’s only 15 years) but it’s gorgeous and blue and belongs to Mama eichanist. She’s bequeathing it to me since she has another sapphire ring which my papa gave to her five years ago.

So there you have it – my something old, new, borrowed and blue!

What do you guys think? 🙂 Are there any traditions which people have or will include when they get married? Think I could make it as a hand model? (not.)

Ms Gingham says: Traditions can be part of the fun after all!!!

Eileen says: “I am a Chinese-Indonesian-Australian getting married to a Dutch-Kiwi. We’ll be having our wedding up in the Hunter Valley and we’re planning it from Sydney. Although our wedding is still more than a year away, we’re trying to plan it now to save the stress later! (We’ll see how that goes).” 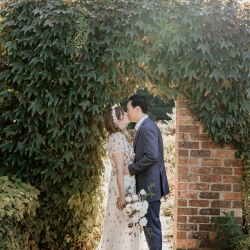