Samantha and Blake’s Modern Wedding By The River

It was a surreal day, as neither  of us had yearned to have a lavish, traditional wedding – but love turned that sentiment around. Up until our early twenties we lived five minutes from one another in Perth – before we met as cadet journalists in the Goldfields ‘red dirt’ mining town of Kalgoorlie. Leaving the red dirt behind seven years ago we moved to London and then returned to Perth, because what we really yearned for was a tranquil, riverside setting. We held our wedding ceremony and reception at a yacht club perched on the banks of the Swan River in Western Australia’s picturesque enclave of Peppermint Grove.

I worked closely for many months with Adelaide-based wedding gown designer and couturier to the stars, Paul Vasilef – who heads up label, Paolo Sebastian. The custom gown surpassed all of my expectations – with off-white Italian embroided lace applique over a French tulle base, which was semi sheer, with further layers of nude, pink and sand tulle underneath – adding contrast. The gown featured an illusion neckline and mermaid silhouette, with a detailed lace back and gorgeous train that glided down the aisle. Working with Paul Vasilef was absolutely incredible. He’s so down to earth and talented, and really understood the aesthetic I was chasing. That’s why it’s important you always choose a designer that already creates gowns you would sell your house to wear. The fact I chose Paul out of several other designers speaks volumes – as it’s quite a long trip from Perth to Adelaide. Amazingly though, he was able to do my consults via Skype – including measurements and fabric selection. Just incredible.

A tough choice for me was whether to wear my hair up or down on the big day. I feel more glamorous with my hair down but with the gown’s lace detailing, I opted for a sleek, low knot bun. My hair was styled by Marie Cain at Head Studio, while Aimee Smart from Allure Beauty Couture used her amazing skills to create a glamorous look with smokey eyes.

While we wanted a modern wedding that would offer some structure to make our 150 guests comfortable, we didn’t want it to feel too stuffy or have the formalities drag on for too long. The ceremony ran for around 20 minutes under the experienced guidance of celebrant Dennis Buckle, with me walking down the aisle with my mother to Johnny Cash’s rendition of ‘Rose of My Heart’. With the river sparkling beyond a foreground of Peppermint trees and lush green grass, the Royal Freshwater Bay Yacht Club ceremony was captured gloriously by Jemma Keech Photography.

It was completely surreal standing at the top of the stairs with my mum as Johnny Cash’s lyrics rung out over the yacht club. It was then that I realised this big moment was about to happen after all of the months we had been waiting. Blake says: “When I saw Samantha, I just thought she looked so beautiful. And as much as I wanted to not smile too much, I couldn’t help it.”

Following the ceremony, the bridal party walked down to the banks of the Swan River for some quick shots.

Inside the reception, a gorgeous vine and bougainvillea hanging feature with naked drop bulbs hung proudly above the bridal party table, which featured candles and a gold mirror centrepiece. For the table arrangements, I chose simple white tablecloths with a mix of baby’s breath, orchids and roses, and a scattering of tea and cylinder candles with gold accents. The tables featured off-white menus printed with taupe tones and name place cards enlivened with a geometric gold foil pattern. The simple style followed a similar vein as the wedding invitations – which were lovingly created by Little Peach Co – an invitation design and printing house in Brisbane. The invitations included simple Helvetica font, with our names in gold foil letterpress and the remainder of the wording in light grey letterpress. We wanted to keep the invitations fresh and modern – and different.

Guests enjoyed a two course meal, having the option to choose from a creamy garlic prawn and rice entrée or the Szechuan duck with seared scallops, while the mains on offer were grilled barramundi with parmesan polenta or a rack of lamb, green beans and red wine jus.

The entire day was filmed by the amazing Josh Lee at White Box Studio.

Event styling and management was made possible by the amazing team at OMG Events, who also helped florist Poppys Flowers install the hanging feature.

Ms Gingham says: Need I state the obvious? What a spectacular dress!!!! A beautiful wedding from start to finish.

Samantha says: “I am a 32 year old Public Relations Manager at a major resources company. My husband and I have been together for 8 years and we were married on 21 February 2014” 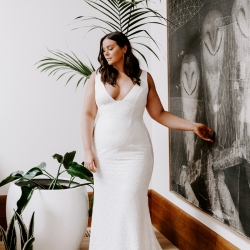