My now fiancé (Alex) and I met when I was 17 and he was 18, through a mutual friend. We got to know each other a little bit, and about 10 months later we could not stop constantly texting each other, and he finally asked me on our first date. We fell in love so quickly and wanted to spend as much time as possible with each other. We moved in together after dating for 11 months, and after just under 2 and a half years together, and 1 and a half years of living together he popped the question!

Now we aren’t a traditional sort of couple.. we picked the ring (ruby centre stone is his birthstone, and diamonds surrounding it are mine) together and paid for it together before the proposal, and we were even already planning the wedding together.. but Alex still wanted the actual proposal to be a surprise, which is hard with me, as I like to be in control.

Alex decided to propose at the Zoo. He was meant to take me there on our third date, but he got called in to work and we had to postpone. The zoo had been postponed until the day he proposed, 2 and a half years later. Alex knew that my favourite animals were the Giraffes, so he decided to make the day at the zoo as spectacular as possible, and organised a private feeding with these majestic creatures. He even hired our wedding photographer to be, Beth to capture the moment!

Now, I did say that we aren’t the traditional kind. We rarely get a day off together, so we decided on a date, and made sure we both had it off work. It was exciting as this was the day he was going to propose… June 23rd. Well, no. Instead I woke up to Alex’s work alarm on June 20th and was bugging him to get up for work, but he refused to. He then told me after about 10 minutes that it was “because I’m proposing today”.. and I found this absolutely hilarious, because well, the first thing that popped into my head was “wait, I haven’t gotten my nails done yet!”.

We carried on with the day, got ready together, left together, grabbed breakfast on the way together, after which I was blind folded in the car, so I wouldn’t know where we were going. It was about an hour’s worth of driving. A word of advice… don’t ever ride blind folded in a car for an hour, just after eating breakfast.. you will not feel so good after.

We finally arrived at our destination, and I was walking around, still blind folded, and confused, until Alex finally took the blind fold off, and I was greeted with the lovely face of our wedding photographer Beth Joy, and then told we were at no other than Taronga Zoo. We strolled around the zoo a little, before we got to the Giraffe enclosure, where we got to have a private feeding for half an hour, with these amazing creatures, and where Alex would ask me to marry him… or rather ask me “Do I even need to ask?”

I look back on this day (only a few months later), and it was the most amazing day of my life. We got to feed the giraffes, stroll around the zoo seeing some of our other favourite animals and getting some more photos with Beth before she left us to be alone in the zoo exploring for the rest of the day, oh and well… we got engaged, too! All I can say is, well… Alex definitely surprised me!

We are both so happy, and are stuck into the wedding planning now, so keep your eyes peeled for another post from us in April 2016 (too far away, of course!).

Ms Gingham says: How amazing to have your proposal captured on film like this! Well done Alex for organising such a memorable day for Tania and yourself!

Tania says: “My name is Tania and I am currently 21 years old. My fiancé is Alejandro (Alex) and is 22, and we have been together just over 2.5 years. We will be getting married in April 2016 in Port Macquarie.” 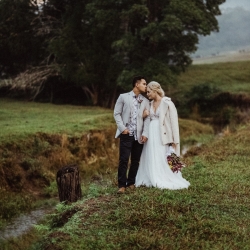