Jody & Andrew wanted a modern taken on a midsummer’s night dream wedding. They wanted their guests to experience the same sense of wonder and magic as Jody had when she’d seen a production of A Midsummers Night Dream in the gardens many years before. A day of magic was filled with incredible bouquets of greenery, a beautiful garden ceremony and of course – plenty of dancing! The couple chose Captured By Pavel  to capture their day.

On how they met, Jody tells, “We met through mutual friends, we were just friends but started dating after I returned from living overseas.”

Jody chose a gown by Karen Willis Holmes, her bridesmaids in lace gowns from Forever New . Jody tells “My gown was exactly as I imagined and made me feel special.”

Sweet Violets created incredible bouquets of greenery for the day, Jody noting, “It was special following my heart and picking something true to me”.

Jody and Andrew were married in the Rose Garden, Royal Botanic Gardens. Jody telling, “I fell in love with the Botanic Gardens when I was young and saw a production of Midsummers Night Dream there. I wanted to create the same sense of wonder and magic I experienced years before for everyone who came.”

Jody walked down the aisle to Pachelbel’s Canon In D.

Jody remembers the day as, “The best day of our lives so far, enjoyed lots of laughs with everyone who is special to us.”

Of their photographers, Jody says, “They were wonderful to work with, made us feel at ease and delivered amazing photos for a fraction of the price of some other photographers.”

Celebrations continued in the centre of the gardens at Botanic Gardens Restaurant.

Jody hand made each place card and favor, noting, “They were tiny corked bottles with little sprigs of Australian natives inside. They were tied with a ribbon and had a leaf shaped tag attached.”

Of their first dance, Jody remembers, “We danced to Nick Cave’s Into my arms, it’s a special song to both of us and Andrew sometimes sings it to me.”

Congratulations on your marriage Jody and Andrew! Thank you for sharing your day with us! Thank you also to Captured By Pavel and Karen Willis Holmes for sharing today’s wedding with us! 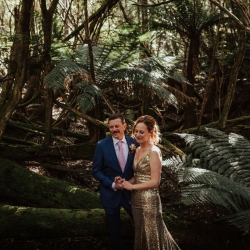