Darryl and I have known each other since our first year of high school. In Year 11, he asked me to our school semi-formal, and on December 20th 2013, he asked me to be his wife. He put so much thought into the proposal – organising our favourite restaurant to cook a dish that was no longer on the menu but that we had enjoyed and eaten many, many times in our first years of dating! He sourced the same wine that we had shared on our first weekend gateway to Mt Tamborine, and popped the question with eight red velvet cupcakes that read, ‘Marry Me?’ There were candles, rose petals and a beautiful bunch of flowers – it was perfect!

I have spent many family holidays at the Sunshine Coast and Darryl and I have also celebrated many birthdays and anniversaries there. Therefore, when we began planning our wedding we knew that’s where it had to be, as it was just such a special place for both of us. When we headed up to the Maleny Manor Wedding Showcase in January last year we had barely begun thinking about the wedding and didn’t really know what to expect. However, as soon as we laid eyes on the gorgeousness that is Maleny Manor we knew this was it. We had only looked at one other venue and we didn’t bother looking at any others; there was just no way anything else could compare. Within a week the wedding was booked!

We both stayed up at Maleny Manor the night before the wedding at beautiful accommodation with views to die for. I was surrounded by my amazing family and beautiful bridesmaids at Blue Summit Cottages.

Darryl had his boys with him at Halfmoon Hideaway. Our bridal party was made up entirely of school friends and I don’t think we stopped laughing all day.

My gown was from White Lily Couture – it was so beautiful! Nicole Adams did my hair and I chose Kerrie Brooke Nails & Makeup Artistry for my make-up. My bridesmaids wore gold and cream dresses by Studio Minc.

We had so much fun planning the wedding together and everything just came so perfectly together on the day. Our colour palette was champagne/gold and peach which was incorporated in many different elements including the exquisite flowers by Mondo Floral Designs.

On the day of the wedding it began raining just as our guests began to arrive, but just before we walked down the aisle the sun came out – it couldn’t have been more perfect. My very talented brother-in-law played ‘The Luckiest’ by Ben Folds on the guitar as we entered, and my eldest sister, Lara Ockerby, who had just recently been ordained as a celebrant, was waiting with Darryl at the end of the aisle. Having my sister marry us was beyond special, and definitely one of my favourite parts of the day.

The ceremony feels like such a blur of emotions, but I remember feeling so excited that we were finally here. As we walked out for the first time as Mr and Mrs Ellis we had chosen the song ‘All I Want Is You’ by Barry Louis Polisar. What we didn’t know was that my seven-year old niece had learned the words and my five-year old niece had bought a harmonica and together they joined their Dad on the guitar as a special surprise for us. I can honestly say that it’s one thing from our wedding we will never forget.

We chose a Sunshine Coast photographer, Matt Rowe Photography, because we wanted someone who was familiar with the area so that the location would be highlighted in the photos. When we met with Matt he was so relaxed, and just spoke so passionately about the area. His photos were amazing, so we locked him in pretty quickly. The property he took us to for our offsite photos was phenomenal. Once again the rain held off and the overcast skies look so beautiful in the photos. Some of my favourite photographs from the day are of the bridal parties’ antics while Darryl and I were off being romantic and gazing into each other’s eyes!

The reception was so much fun. The speeches had everyone in stitches, and we have so many hilarious photos from our photo booth by In The Booth. We had Scott from DJs In Your House getting everyone moving on the dance floor too! Our cake from Breezy’s Cakes consisted of one beautiful naked cake, and of course dozens and dozens of delicious cupcakes!

The service at  Maleny Manor was second to none, the staff are absolute professionals who go so far above and beyond to make sure the day is nothing but perfect. After we had finished waving our guests farewell we returned inside to finish our drinks and dessert with our family and bridal party and reflect on our wonderful day!

Ms Chinoiserie Says: What a wonderfully happy day for you Jannah and Darryl – and how very special to be married by your sister! 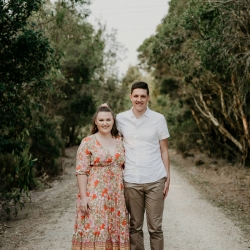