Not only is Britt and Mitch’s breathtaking Belongil beach wedding incredibly whimsical and lovely, the couple had such a positive, happy approach to planning their day, you can’t help but be swept away by it. “This sounds crazy,” says the bride. “But our favourite part of the wedding planning was that nearly every one of our “first choice” vendors ended up not working out. When we ended up booking the vendors that were a part of our wedding, we had such a perfect team to create and capture our day. Throughout the planning process, we were constantly reminded that everything happens for a reason, and what is meant to happen will happen, if you let it…” We couldn’t have said it better ourselves! Bulb Creative were there to help capture the magic of this beautiful day.

Of how the two met, Britt remembers poetically, “We met in a small beach town in Southwestern India. Neither of us felt like we were living the life we were completely passionate about, so we did the obvious and left everything behind to go to India. On the flight there, a man sitting next to me said, “You will fall in love in India. It is written.” I laughed it off, but he was exactly right. Mitch and I arrived at the same little hostel in an unheard of beach town within hours of each other, and from the moment we met, we were inseparable. Mitch kept saying to me, “I know you…” and I felt the same. While visiting me there, my dad actually met Mitch and they got along wonderfully. Three weeks later, we got engaged. Luckily, when I called home to tell my parents, my dad realised he was called to India so he could meet my future husband, and was so happy for us both.”

“My mum and I were looking at dresses on separate computers when we both turned our screens around at the same time and said, “What about this one?” It was a Grace Loves Lace dress and it was perfect,” remembers the bride. “I gathered a few friends and went to try on dresses, saving “The One” for last. The others were stunning, but when I finally came out wearing the one I had seen with mum, the choice was clear. I felt like the dress was made for me. It was perfect, because I wanted a two piece dress so I could wear the top again on our anniversary. It was pouring rain outside, so we stayed at the boutique for an hour after my appointment, drinking champagne and eating cake.” Britt’s Grace Loves Lace gown was serendipitously named the “Jasmine”, which was incredibly fitting, as the bride had decided to wear a crown of jasmine on her wedding day. “In India, when a man wants to court a woman, he give her jasmine to put in her hair. So, of course, Mitch would bring me strands of jasmine for my hair nearly every day while we were in India. The dress was just meant to be…”

Sourcing the jasmine for her flower crown proved to be no easy feat! “I couldn’t find a single florist in the area who could source fresh jasmine flowers,” the bride says. “Not willing to give up, I finally found a florist in Melbourne that ended up having the flowers flown in from India, and they were being delivered to an airport about 30 minutes south of Byron. Two days before the wedding, I drove to the small airport and was hand delivered a chilly bin filled with jasmines. I found a local florist, Bower Botanicals, who created a flower crown out of the loose jasmine flowers, and it turned out beautifully.”

The groom wore light linen pants in sand, a white linen shirt and blue linen jacket, all from David Jones. As soon as Mitch tried the ensemble, he knew it was the right choice, and didn’t look further for his wedding day attire!

The couple were married on a stunning piece of the Belongil beach at Byron Bay, with crashing waves for their wedding soundtrack. “A few days before the wedding, Mitch and I took a day trip to a spot I remembered seeing large bits of driftwood. We gathered about ten large pieces of driftwood, and on the day of the wedding, Mitch and a few of his friends built the arbor, holding it together with twine.”

“We chose one of my favourite songs, “Lovers’ Carvings” by Bibio for me to walk down the aisle to. Our friends learnt the song on ukelele and guitar, and played it while I walked down the aisle. When we asked our friends to learn and play for our wedding, they instantly agreed. They would get together each week for months and practice, making sure it was perfect. To know that we have friends that would go to such effort for us made us both feel really loved.”

“We chose a secluded spot on the beach where there were no buildings or structures,” tells Britt. “We had a row of benches set up at the back and we laid out a dozen or so mandala beach blankets with pillows along either side of the aisle. We had a lot of guests who had never previously met, but we wanted everyone to feel connected and relaxed with each other. We didn’t have a wedding party, but a few of my closest friends walked down the aisle before me. I tried to walk as slowly as I could, but I was so excited I felt like I was running.”

The couple’s close friend, Tegan, was their celebrant. “She was the first person we called to tell we were engaged. While everyone else thought it was crazy for Mitch and I to get engaged after knowing each other for three weeks, Tegan was just happy for us. For her to be the one to officially marry us was another show of her unconditional support of our relationship.” Britt and Mitch decided to write our own vows, drawing from various traditions and Eastern philosophies as inspiration, and for the exchange of rings, they each repeated a traditional Mayan verse, “I am you; you are me. You are my other me. If I do harm to you, I do harm to myself. If I love and respect you, I love and respect myself.”

Britt and Mitch chose Harley and Ainsley from the Bulb Creative to document their beautiful day. The bride remembers, “Looking at their website, I really liked their style. They were also really reasonably priced, especially for how beautiful their work is. They really try to capture the candid moments, which is exactly what Mitch and I wanted. What we really liked about the Bulb Creative was the candid shots were still profound and beautiful. We had a few shots we wanted to recreate from when we first met in India, and the team were really happy to work with us to capture these. I still can’t believe how amazing the photos turned out. Harley and Ainsley are legends!”

The couple undertook another DIY task of assembling the place cards and wedding favors for their guests. They decided on mini pineapples, bought from Tugun Fruit and Veg,  as favours, which also served as the place settings. “They are so adorable, and equally delicious!” gushes the bride. “However, I didn’t anticipate the leaves being as sharp as they were. We tied 40 name cards around the stems and by the end of it, our hands were pretty scratched up. Seeing the rows of pineapples on the tables at the reception made it all worthwhile. It looked like a scene out of a vintage tropical party!”

“We originally booked with another venue, and had spent weeks discussing with the manager our food and drink options. One day, we received an email saying the venue wasn’t able to host our wedding. It was a shock, but Mitch and I have both experienced enough to know that when things don’t work out it’s because it wasn’t exactly right and a better option will come along. Sure enough, we found The Belongil. As soon as we met Mindy, the owner, we knew it was exactly right for us. The venue is a beach cafe, with a chilled  vibe and amazing food. It was perfect.”

“When Mitch and I were planning the wedding, one of the things we really did not want was a first dance. However, while we didn’t technically have a first dance, I did put something together to get the night started. For my hen’s party, my friends hired two lovely women from India to give me a “Bollywood makeover”. We asked them to show us some Bollywood dance moves, and it evolved from there. We decided we would surprise Mitch and the wedding guests with our impressive new skills. Once the plates were cleared, we snuck away to turn on a very Bollywood sounding song, lined up and started our dance. Halfway through the dance, we pulled Mitch onto the dance floor and danced around him before pulling everyone else onto the floor, which by the end turned into one big Bollywood dance. It was so fun!”

We just love your bohemian wedding, Britt and Mitch! Thank you both, and thank you also to Bulb Creative, for sharing this special day with us! 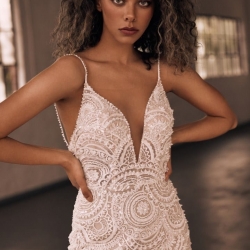