Polka Dot Travel Lounge with Angie from Angie Away

Angie is a woman of many talents. She’s a publicist by training, a freelance journalist, TV personality and a travel and lifestyle blogger. You may have read her blog Angie Away or seen her on Instagram where she has over 67,000 followers! Angie has been blogging since 2006 but decided to do it professionally in 2010 after quitting her job at a PR agency to travel the world by herself. It was on this journey that she started Angie Away. Originally her trip was only supposed to last a year but the travel bug caught Angie and she’s been on the go ever since!

Recently Angie became a newlywed and has her sights set on some future milestones like becoming a foster parent, a best-selling author and a screen-writer. She says “If your dreams don’t scare you, they aren’t big enough, right?” We couldn’t agree more!

What is your favourite region?

In the whole world? It’s impossible to pick just one! At the moment I’m loving the Caribbean. It’s so easy to get to from my home base in Florida. My husband and I can visit on long weekends and never suffer from jet-lag. I love all the influences in the Caribbean as well. Island-hopping gives me the chance to practice my French and Spanish, and eat unbelievably fresh seafood.

That’s a tough decision – there have been so many great ones! I love Belle Mont Farm in St. Kitts, Koa Kea in Kauai, the Myconian Ambassador in Greece, the Indigo Pearl in Phuket, Pink Sands on Harbour Island… I could go on forever and ever. I love hotels!

My husband and I stayed at an all-inclusive with a butler for our honeymoon, and while it was expensive, I’m glad we did it. It just added extra oomph and sophistication to the week. It was so nice to be spoiled! We also made some time to rent a car and escape the property, so we did feel like we had our own special adventure outside the gates. I say it’s your honeymoon – you only get to do it once. So save money on the wedding where you can (I did our decor and made my own bouquets) and put it toward fun activities and luxurious honeymoon accommodations.

The ideal location for a proposal?

My husband proposed to me on a beach, which would’ve been lovely if it wasn’t the coldest day of the year! We also got married on the beach and renewed our vows on the beach. WE LOVE THE BEACH. But, if you’re in love, location doesn’t matter. He could’ve asked me in an alley behind a bar and I would’ve said yes.

Far-flung locations with over water bungalows get a lot of press, but there’s something to be said about going somewhere closer and saving the long journey for an anniversary celebration in a year or two. There’s nothing quite so exhausting as your actual wedding day, so the less stress you can put on yourself in the week after, the better. Plus if your destination wedding turns out to be a disaster like ours was, you will have time to recover rather than having to spend 36 hours on a flight the next day. I cannot imagine how we would’ve fared if we had a long-haul trip ahead of us after what turned out to be a very trying wedding week.

All images via Angie from Angie Away

Ms Polka Dot says: Great advice choosing somewhere closer for your honeymoon and saving the long haul trip for a future date. I can’t imagine arriving so tired that you can’t even see straight would be a great start to a honeymoon! 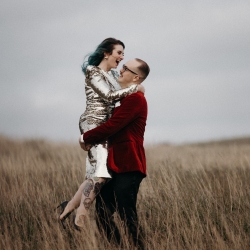