Sam and Corrine wanted something truly unique for their wedding day- a celebration that would reflect their quirky, free spirits and honour their deep connection and love. They found exactly what they were after in the Secret Garden Cafe in Lithgow, NSW. While the nearby Hassans Lookout views were breathtaking, these two only had eyes for each other. The emotional speeches, superb vintage outfits, hilarious dancing, stunning outdoor ceremony and all of the details were captured by the talented photographers Aton and Raya from Across the Forest. Thanks to the newlyweds, Sam and Corrine, for sharing the details of their day with us below. Enjoy the read!

The style… The style and theme of our wedding was funky, quirky, relaxed laid-back. It was in a natural setting, with lots of bushland around. We tried to incorporate a lot of native flowers into the bouquets and when decorating the venue. We asked our guests to wear colourful, funky clothing and we ourselves wore very colourful attire. We tried to make the day as fun and relaxing as we could.

The proposal… Corinne proposed to Sam! She whisked him on a birthday weekend away to Jenolan Caves, and proposed at 4am under the biggest meteor shower of the year, with a piece of meteorite rock that they would later make into their matching wedding bands.

How did these two souls meet… Sam and Corinne were set up by their best friends. Corinne’s friends said they had found the male version of her, and that she just had to meet him! Sure enough when they met they discovered that they had a lot of things in common, including a love of travel and adventure, nature and the beach, and bushwalking.

Corinne and Sam went shopping for their outfits together, and bought them on the same day. Corinne stumbled across her dress at a vintage fair, and it so perfectly matched Sam’s outfit that she had to get it! She had something else in mind for her dress but was very open to other options, and was really excited and happy when she found her dress, which is a vintage dress from the 1950s, owned by a politician’s wife for most of its life. Corinne wanted to wear something colourful and unconventional, and she really found this in the dress she ended up with. Also, the dress was very affordable, so price doesn’t necessarily mean perfect.

Hair and make up… Chantelle from Boho Hair and Make-up was such a relaxed, and talented hair and make-up artist. She made sure Corinne, and her and Sam’s family had the right look on the day and was very patient and helpful.

The groom’s attire… Sam also wanted to wear something colourful and unconventional, and he knew that paisley needed to be a defining feature of his outfit. He happened upon his whole outfit at the one amazing shop where the shop assistants were super helpful – Blokes of Balmain.

We decided to keep the bridal party small, so we just had Sam’s niece and nephew and Corinne’s cousin’s children as page boys and flower girls.

We chose a relaxed venue in a natural bushy setting, which was part of an animal sanctuary, in Lithgow, in the Blue Mountains. We both love the Blue Mountains and got engaged there, so we though it was fitting to get married there.

We had an amazing florist who grows her own organic and native flowers at her farm local to the venue in the Blue Mountains – Floral by Nature. Celine did an AMAZING job! We wanted a very natural looking bouquet, and Celine added some beautiful extra touches such as feathers and hand-dyed silk ribbon. The flower girls bouquets as well as the floral hairpiece she made for Corinne were stunning, as well as the floral arrangements in the venue.

Sam loves the song ‘Shine on you Crazy Diamond’ by Pink Floyd, as it has some really beautiful instrumental parts which build up to an amazing crescendo, so Corinne walked down the aisle to that with her father and the flower girls/page boys. Some of the guests commented that walking down the aisle to this song was like watching an album cover in real life.

We wanted to be really present during our ceremony, and have it be very down to earth, not overly romanticising marriage. It was a gorgeous ceremony which captured all these elements, and we had a few poetry readings including: Love’s Philosophy by Percy Bysshe Shelley, Love Sonnet 17 by Pablo Neruda, A poem from “First Poems” by Rainer Maria Rilk.

Our first dance was so much fun! We did a synchronised dance to Belinda Carlisle’s ‘Heaven is a Place on Earth’. Parts of the song saw us on our backs with our legs bicycling in the air. Some guests said this was their favourite part of our wedding.

The DIY details… We put together a photo display of photos of us from when we were young to photos of us when we met, which were really nice to have. We wanted a really simple set up at the venue with native flowers and candles, which worked really nicely. We wanted to make the whole wedding planning and experience as relaxed and laid-back as possible. Our wedding was really low-key and affordable, and we weren’t fussed on the small details in the planning or of the day. At the end of the day, it was a celebration of our union, and the minor details really don’t matter.

Favourite detail of the day… Our wedding rings. They were made by Sean O’Connel from Orange Dot.

They were handmade from meteorite, yellow gold and tantalum – specifically catered to us, and the rings are matching (not something many couples have).

Last but not least – Our photographer’s Anton and Raya from Across the Forest were phenomenal!!! They spent a lot of time with us before the day talking about what we wanted from our photos, scoping out the wedding site and also chancing upon an amazing place at a lookout over Lithgow for us to have our wedding shots – when they saw it they just knew we had to have the pictures there. Anton and Raya were so relaxed on the day, and made us feel very comfortable. We were so happy with the photos they took – the beautiful quality and interesting, unusual shots were really amazing. They went above and beyond in the service they provided, and were very adventurous in the post-ceremony shots to ensure we got the best photos we could.

Ms Zigzag says: From Corrine breaking tradition by proposing to Sam, to them going vintage shopping together for their wedding day outfits, to dancing with their legs in the air, I just love everything about this beautiful couple. I wish Sam and Corrine all the happiness that is coming their way. Thank you to Sam, Corrine and Across the Forest for sharing such an incredible love story with us. 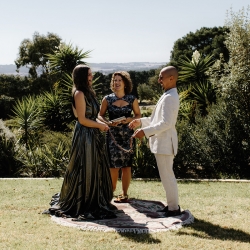