Pop some flowers in your hair and get in the spirit to read the most charming ‘double’ proposal story that took place in the Golden City, San Francisco. Following the special overseas proposal, Tim and Ash brought the San Francisco vibe Down Under, where they celebrated the occasion in ‘hippie-boho’ style amongst family and friends!

How did you meet?

We met through mutual friends at a party. It was a pash and dash situation until a few years later when we reconnected and the timing was right for love to blossom.

What do you love about each other?

We’re each other’s complete opposite, which means life is always very interesting, passionate and sometimes fiery! We balance each other out and fit together like a one in a million missing puzzle piece.

Do you have any funny relationship stories?

We own two pet French bull dogs Meatloaf and Maple, who actually share our contrasting personality types. It’s really cute they’ve taken after us, although I think they settle their arguments a lot quicker than we do!

How did you become engaged?

We wanted to escape winter last year so travelled on a holiday to the US and enjoyed summer in San Francisco. At sunset on a beautiful beach next to the Golden Gate Bridge, I picked a bunch of Californian wildflowers and got down on one knee to ask Ash to marry me, to which he said ‘yes’ before himself getting down on one knee to ask me the same question. It was all very soppy and romantic, we even sang the 1967 hippie anthem ‘If you’re going to San Francisco be sure to wear some flowers in your hair’… We laugh now because we later found out that beautiful spot is actually a nude beach during the day; something we won’t be telling the grandkids!

Why did you choose this style of shoot for your engagement photos?

We threw a big engagement party which fell the week of the YES result for the marriage equality survey last year. We chose a bush dance theme to get all our family and friends up off their feet and celebrating with us! We decorated and catered it all ourselves (with the help of some family and friends of course). It ended up looking magical and really represented our vibe, a bit hippie boho and rustic with Aussie charm.

Where did the engagement shoot take place?
It was a place called Minto Bush camp, they don’t usually hold functions like ours there but it was the perfect situation for what we wanted, mostly the freedom to keep dancing on through the night with no curfew! It was a bit of a blank canvas for us with just some old rusty shed and basic amenities and required a bit of work for us to put together ourselves but it definitely paid off!

When is your wedding set for?

We are looking at dates at the moment, thinking springtime beach ceremony at Byron Bay to coincide with the annual humpback migration up the east coast of Australia. This area is very sentimental to us, a favourite holiday destination!

Tell us about the photographer?

I was so stressed to find a photographer who would understand our unique and casual personalities and who I could entrust to capture our special moments, Jen from Next Chapter Photography was so wonderful and right away I knew she was perfect for us! So professional and easy to work with, she didn’t get in the way at all and managed to capture the magic.

Ms Zigzag says: We are so thrilled for Tim and Ash! A double proposal and an engagement celebration held the same week as the ‘yes’ vote was released for marriage equality in Australia, calls for a bush celebration just like this! Thank you Next Chapter Photography for sharing this awesome love story with us. 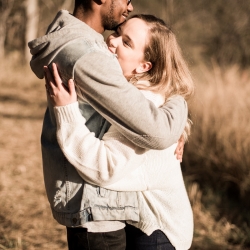