“We wanted a relaxed and natural feel to the photos, we didn’t want to feel forced and fake. “There is a myth when to comes to engagement photos, that you have to be comfortable in front of a camera, that you have to know your poses, how to smile, how to act. But we’re here to tell you – nothing could further from the truth. And all the evidence – it’s right here in the romantic forest engagement photos of Courtney and James captured by Muse Photography. For these two, who met as teenagers while working at a local supermarket, a wander in the beachside forest at Fishermans Bay, a few snuggles and plenty of quiet was just the right combination to capture beautiful imagery that celebrated just them and the natural vibes they wanted. The peace and familiarity something that has long carried through their relationship.

But it all started with a few first dates, the bride telling the tale. “Our first time we went out together was with another couple (we went as friends) we went to an Indian restaurant and all I can remember is that I was so nervous and I asked for chop-sticks!!  Our first date alone was to a small Vietnamese restaurant – it was really sweet and both tried new foods and talked for hours.”

The proposal took Courtney completely by surprise, to the extent that she thought her future husband was having a laugh. She remembers “We had booked a spur of the moment trip to Thailand. I had no idea James had other plans. On our first day, we went and booked a day trip to go and visit some of the neighbouring islands and go snorkelling.
James was adamant about going to one particular island – he kept saying how good the snorkelling was there.

I was packing our bag to take and realised James had put a jumper in the bag, I thought to myself ‘what an idiot, he won’t need a jumper it is 100degrees outside’ and I threw the jumper on the floor and kept packing, then I went to have a shower. While I was in the bathroom James saw the jumper and had to sneakily put it back as that was where he had the ring hidden lol. The first island was the one James was adamant about going to.

He had been acting really weird on the boat ride there and then when we got to the island he wanted to sit so far from everyone, I thought something was wrong with him. We went for a quick swim then went back and sat on the sand admiring the view.

James started to act really serious and saying things like ‘you know I love you’. I was confused and thought he was playing around (because he is never serious!! I jumped up and said ‘come on stop being silly we have come here to go snorkelling on this beautiful island let’s go’ then I went off snorkelling.

While I was in the water though I did think that maybe he was actually being serious and thought I might have ruined everything. Every island we went to I was waiting for him to say something or ask something.

James then made me wait all day until the last island (which I think was better than the first anyway) where he got down on one knee in the shallow water and asked me to marry him!
James later told me about the jumper that I threw….. hahaha He said he wanted to ask me at the start of the trip because he didn’t want the responsibility of the ring anymore!”

And James’ version of events? “I was that nervous I couldn’t talk the morning of the proposal and Courtney thought I was angry at her. Courtney was that surprised she ran into the water to go snorkelling as I started my little speech. I guess it was half my fault as I can never be serious, the one moment I decided to be serious she knew immediately what I was doing and freaked out. After realising what I was actually trying to do, Courtney was very apologetic. I let her sweat it out for another couple of hours before I asked her on one knee in the water.”

On what he loves about Courtney, James tells “I love Courtney’s outlook on life and caring nature, I love how she laughs at herself in the silly things she does or says, I love how she stamps her foot when she is trying to be serious, I love coming home from work and seeing the smile on her face when I walk through the door, ready to listen to how my shift went.”

“I love his big smile, he is always making me laugh and I know he would do anything for me!” tells Courtney on James. 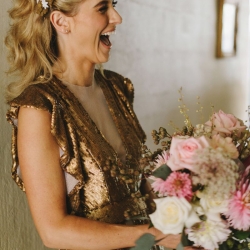