Long Summer days mean one thing – festivals. And what better than to combine a wedding with a festival and hold your own wedstival?

It’s exactly what our gorgeous newlyweds Jade & Dan did for their own big day, with everything from food trucks, to cheese cakes, and the brightest of decorations. And it’s this glorious celebration that we’re diving into to today! “#FairwebsterFestival was planned to be as casual and family oriented as possible! We really wanted our family and friends to get together for a whole weekend, and at some point through it, there would be a wedding.” The gorgeous Jade is filling us in on all the stories today, along with stunning photography by Daniel Brannan who captured every single moment and detail as they unfolded.

It was the most gorgeous new chapter for these two, who met while at work. In Jade’s words “We met while working away on a job in Mackay in 2014. Our first interaction was Dan making me work late so I could send a notice out he was still working on – little was I to know that running late is a seriously bad habit of his! We became friends a few months later but didn’t start dating until just a few months before I moved to London, in August 2015, which was the start of 18 months long distance. Somehow we made it through that and here we are.” The pair became engaged on a weekend trip to  Jamala Wildlife Lodge, surrounded by animals (one of the bride’s favourite things) and the happy moments? They just kept on coming! Never more evident than in their celebration, so let’s get into it!

With festival vibes in mind, the couple chose the beautiful  Iluka Retreat for their wedding, noting  “Our family and friends are so widespread, we really needed to find somewhere that had accommodation for everyone coming. The area was somewhere I had spent a lot of my childhood, and it was important to us that my Great Grandma could attend, and she lives in Melbourne.”

The bride’s dress? Not her original choice, but absolutely perfect for her. She tells “Dan and I both work Fly In Fly Out in north Queensland, so we are away 3 weeks a month, and when we are home in Newcastle with Dan’s daughter Hollie, it doesn’t leave much time for dress shopping. So I did a bit of online shopping, to get a “back up dress” and it ended up being the real thing – it was a bargain find, from Asos!” The finishing touch was her great grandmother’s brooch, which her sister had also worn on her own wedding day.

The bride walked down to a very special song, she explains “Dan actually walked down the aisle first, with his daughter Hollie, to Here Comes The Sun. Hollie then sang Marry You, by Matt Wills, as I walked down the Aisle – this was such a special moment. After the Ceremony, the recessional song was “Walking on Sunshine” but we had a technical glitch in the music – luckily, my mum was waiting for her moment to perform, and led everyone in singing it – it was much better hearing all our friends and family!”

The couple chose Cheryl Lawrie to perform their ceremony. “Casual, fun, but meaningful. Equal parts happy tears and laughter; and I think the brief was executed. We did our own thing, as much as possible. We only threw in the “legal bits” at the last minute. My brother and our sister-in-law each did a reading.”

Dan’s daughter Hollie was a very important part of the ceremony says Jade. “Hollie and I said vows to each other first, and I gave her a necklace with the same stone as my engagement ring as a symbol of our promises to each other, before Dan and I then did our vows.”

“One of our favourite parts of the whole weekend was all the kids getting up to tell us what Love means to them, as we signed all the documents during the ceremony.”

The newlyweds kicked off the party with the cutting of their cheesecake from D.O.C. “Cheese tasting for our wedding cake was our favourite part of wedding planning!” says Jade, “The truffle cheese is to die for.”

The couple’s festival style vision for their day was planned and executed by the team at Pop Up With Style. Jade raving ” Pop Up were INCREDIBLE. Having a wedding planner/stylist team really helped with us working away, and they were able to pull the jumbled ideas we had together on a budget.

Jess and her team were worth their weight in gold. They were always available to help with the little details in the lead up to the wedding and stepped it up again on the day. She had the right mix of ‘let it flow’, and ‘we need to do speeches right now!’ approach. If you are planning a wedding where your venue is a blank canvas, Jess’s team were perfect.”

Jade and Dan worked on a mix of flowers, using artificial blooms from Seaholly Flowers and fresh blooms styled by Pop Up With Style. Jade explains “I really wanted native flowers, since we were getting married in a native bush setting. Flowers was something I struggled with allocating budget to, so I decided to go with artificial flowers from SeaHolly. They were so lifelike, and I thought it would be nice for me and the bridesmaids to be able to keep them. Jess from Pop Up then worked with a smaller budget to add some pops of colour to the reception area and bush chapel. And then, she surprised me with turning some of the leftover flowers into a beautiful bouquet which I ended up using and then was able to pass on to my Great Grandma.”

The wedding favours? Designed by the bride and groom – they were camping mugs. How apt!

“We had a few visions we just couldn’t quite get together, then Pop Up With Style came to the rescue, working right up till the eleventh hour, to create a magical setting, merging our plan for a botanic nature theme, with the fun, colourful festival vibe. I don’t know if it was them or not, but believe they can seriously do anything – because the weather was also PERFECT!”

Guests enjoyed a feast of woodfired pizza from  Happy Camper Pizza Truck and plenty of flowing drinks from Woodland Folk.

Says Jade “Our favourite part was all our family and friends coming together, and everyone who chipped in; aunty playing guitar, another one doing my hair, friend doing make up, all the cleaner-uppers, friends making floral arrangements, and BBQ cookers / salad makers for the other meals across the weekend, friends making sure everything ran smoothly, and my bridesmaids just being the absolute best!”

Of their chosen photographer, Jade remarks “Dan Brannan was incredible! His timing and positioning were on point throughout the day. He was everywhere he needed to be, he seemed to capture every laugh, every smile, and every hug. He fit in like anyone else and made it so easy to relax around him. The photos were published under 2 weeks after the wedding and are just perfect.”

Not everything went quite as smoothly as they’d hoped tells Jade, “One of the groomsmen, also our witness, rolled out of bed in the middle of the night, not remembering that he was on the top bunk. He landed on his shoulder, dislocating and breaking all the bones in the shoulder. The morning of the wedding we were frantically changing the wedding certificate, and fitting another groomsman.”

There was nothing serious about the first dance. “We chose ‘Shut Up and Dance’.” tells Jade. “Hollie DID try so very hard to choreograph something for us, and we thought we were great after a few wines. But stage fright took over, so we let the kids have the first dance timeslot, but then Jess (from Pop Up) sprung our song on us so we got up there and gave it our best shot, before letting the kids take back over and really kick off the dance floor.”

Jade & Dan chose  Highlight Reel Productions to capture the most beautiful film of their day. 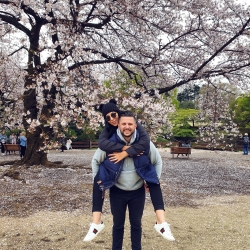 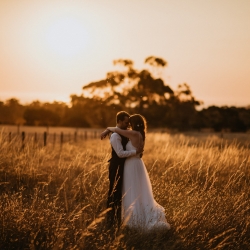