For wine lovers and foodies alike there’s nothing like a mini-moon spent sipping local wines and eating the finest produce. So, this month we’ve rounded up the best wineries to add to your hit list in the Canberra and surrounding regions.

A post shared by Brindabella Hills Winery (@brindabellahillswinery) on Nov 9, 2019 at 5:22pm PST

Established in 1986, initially as an experimental plot, Brindabella Hills Vineyard is now recognised for award-winning wines. Achieving 21 vintages, the team recognise that crafting premium wines is no longer an experiment but 100 per cent achievable in their location. Have a bite to eat in the café of a weekend, where you can feast on delicious meals, such as wild three mushroom ravioli with burnt butter and crispy sage. You can thank us later!

Pialligo Estate is located centrally in Canberra and a popular wedding venue. Though, if you have your wedding covered, you can still enjoy the flavoursome cuisine or a cellar door experience. There’s plenty of dining options including the Pialligo Farm Shop Café, Pialligo Fields, Pavilion Dining and Market Grill. Using organic practices Pialligo grows their own produce which also serves the local Canberra region.

Located just shy of 30 minutes from Canberra you’ll find Lake George Winery, that was established in 1971. Their wines are award winning, their grapes are handpicked and the winery prides themselves on following sustainable practices and promotes their vegan friendly wine. Home to Westering Restaurant that was relaunched in 2019 with a brand-new menu and style, you can enjoy a bite to eat by the comfort of the stone fireplace or outside overlooking the vineyards.

Ms Zebra Says: These are great options to visit whilst honeymooning in Canberra! Enjoy sipping on delicious wine and eating tasty food – thanks Bec for these great recommendations.

About Bec Lawrence: I’m an animal lover, sustainability advocate and natural landscape enthusiast. On a good weekend, you’ll find me hiking with my two adorable beagles and my equally adorable husband.

The Colour Issue is filling our colour loving hearts with so much joy this month and today’s wedding honours the brights differently. A bright bouquet, a bright pair of shoes and a Spanish villa venue that has us dreaming of long summer escapes. Add in plenty of champagne, a boogie-woogie worthy first dance and their favourite people and this is a match made in heaven. Meet Marina and Sergi and their wedding, captured beautifully by Ariadna Balart of KUNIK STUDIO.

It was a romance set in motion when these two were children, tells Marina. “We have been together for 13 years, we met when we were children. But immediately we knew that our relationship would be forever.” The bride to be popping the question herself. “We both wanted to get married but he didn’t decide to ask me. One day when we looked at wedding farms, I knelt and asked him.”

“The flowers were very cheerful, with lots of coloured and silver flowers. We use olive branches because it is a very important symbol for my family” tells the bride of the bright and beautiful floral details styled by Floristeria Orquidia.

The bride wore a gorgeous lace gown by L’avetis. Marina sharing “I was very clear about my style and wanted to feel myself. My mother helped me with everything. On my wedding day, I wore earrings from my grandmother and a bracelet that my mother gave me, the shoes were turquoise and the dresses had two pieces.”

The couple included plenty of olive branches as a special nod to their family.

The couple booked a homestead in Gironella, Berga for their wedding, “It was a rustic house in the middle of the field, in a very special place for us” explains Marina.

The groom walked down the aisle to his brother playing the electric guitar, the bride following soon after with her father on her arm.

Of their ceremony, Marina remembers “We wanted it to be emotional and natural. It was done by a friend of my mother and our friend’s readings. We cried a lot, it was beautiful.”

Guests were gifted small trees to take home and plant themselves as wedding favours, a nod to the ceremony where the newlyweds planted their tree as a commemoration.

The dancing? Not just fun, but an utter surprise from the newlyweds to their guests, the pair taking to the floor, the bride’s skirt coming off to reveal dance-ready pants underneath, much to the delight of their friends and family. “The whole day was unforgettable, from the moment I woke until the end of the night. But the dance-off we rehearsed? Lots of fun!”

“It was an unforgettable moment for everyone, we started dancing “You’ve Got a Friend in Me”, by Toy Story. Then the music changed, I took off my skirt in front of all the guests. We danced a swing dance to, “Hit the road, Jack”!”

“Our favourite photos are the last two,” remarks Marina. “We’re dishevelled, looking happy in the light of the light bulbs.”

A big congratulations to you both Marina & Sergi! Thank you for sharing your beautiful day with us. Thank you also to KUNIK STUDIO for today’s beauty in images!

Light & Bright – What Are Europe’s Most Colourful Honeymoon Locations?

Photo by Nick Karvounis on Unsplash

There’s just something about the light in Europe. Sunset turns everything pink when you’re on a vaporetto, cruising down the Grand Canal of Venice. The midday sun in Mykonos bounces off the whitewashed walls of cafes and bars. Early morning rays light up the rainbow of tulips outside Amsterdam. From sunrise to sunset, Europe is awash with all the colours of the rainbow. You can’t help but be loved up with roses in your cheeks when you’re lapping up all that sunshine and all that colour. Here’s our pick of honeymoon hotspots that really brighten things up:

Photo by Luca Bravo on Unsplash

You haven’t been to Venice if you haven’t made time to cruise over to Burano. The small island is just a 40 minute vaporetto ride from Italy’s city of love, but it will steal your heart. Pink, yellow, red, blue, purple, green – its quaint canal front homes are an absolute riot of colour that somehow works. Spend an afternoon strolling the streets and admiring Burano’s other famous asset – beautiful handmade lace. Honeymoons are the perfect time to pick up something lacy!

Photo by Tamara Budai on Unsplash

Okay so it’s not exactly a riot of colour, but the whitewashed walls and bright blue doors of Mykonos deserve to be on this list. Not only do they literally wash the small island town in bright white light when the sun is out, but throw in the bright azure of the Aegean sea and you’re in heaven. Whether you want to eat fresh seafood as the sun sets, party under the stars or hideaway in a boutique hotel, Mykonos has you covered.

Photo by Florencia Viadana on Unsplash

The painted houses of Copenhagen’s Nyhavn district are a great place to kick off your sightseeing of this diverse European city – in the 1800s Hans Christian Andersen called the pretty canal front home – so what better spot to celebrate your own fairytale?! Beloved by sailors back in the day, you’re likely to find tourists from every corner of the world strolling along the canal dawn until dusk. At Christmas, the fairy lights add an extra special glow to the bright red, yellow and blue facades.

This UNESCO World Heritage Listed coastline between Genoa and Livorno on Italy’s east is famous for almost too many things – rugged cliff sides, calm swimming bays, dramatic cliff bars, award winning cuisine. Nothing is as recognisable as the brightly coloured houses that seem to teeter on the edge of the cliffs before sprawling down to the waterfront of the five precious towns. It’s hard to pick one town to base yourself, but the bright red, cheery yellows and vivid greens of Vernazza’s old town are a real charmer. Spend your mornings ordering espresso, your days hiking the famous coastline and your evenings drinking spritz.

Photo by Andres Bartelsman on Unsplash

The self proclaimed most beautiful spring garden in the world, Keukenhof is home to almost seven million flower bulbs, and when they’re in bloom, you can just imagine what a sight it is to behold. Located an hour’s drive from Amsterdam, the sprawling park is only open for 51 days of the year –between March and May – so time your visit for a riot of petals in all colours of the rainbow.

Whether you want to stroll through your own fairytale or curl up in a colourful cottage for the night, Europe shines bright.

Ms Zebra Says: There is no shortage of colour and pizazz in Europe. These are all fabulous destinations that celebrate all the colours Europe has to offer. Thanks Lisa! 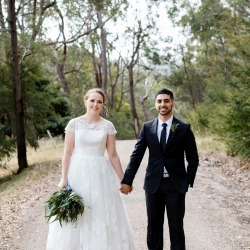 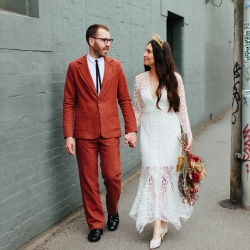 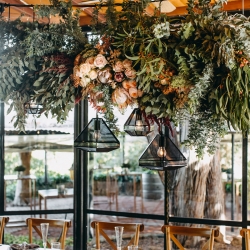