Ria and Craig – The Celebration

We’re back with the second part of Ria and Craig’s wedding feature! Ria and Craig decided to get married at Sydney’s MCA (Museum of Contemporary Art) in the Harbour Terrace Room.

The room would hold many more guests than the couple had, so Ria decided to screen half of the room off and turn it into an indoor ceremony space! Ria and Craig began their ceremony as the sun was setting at 5.30pm.

Ria walked down the aisle to “Somewhere Over The Rainbow” sung by Ray Charles.

At the top of the aisle, Ria had a poem (Sex & The City fans will recognise this one!) and a big vase of tulips. Ria’s father is Dutch and tulips are her favourite flowers. The ceremony was performed by Craig’s university college priest.

The ceremony space was the first place the guests walked in to.

Ria’s sister sang “An Ordinary Miracle” by Sarah McLachlan during the ceremony.

Ria and Craig walked back to the aisle to “The Best Of My Love” by The Emotions to get the party started straight away!

Ria and Craig set their venue up like a ship, guests walked past the bar (the galley) onto the MCA deck which was set up like the deck of a ship. Overlooking stunning Sydney Harbour as the sun set, the deck was decorated with navy, white & red cushions, life saving rings, white ottomans and rattan chairs. Most of the guests were not from Sydney so the brilliant harbour views got everybody talking!

While drinking cocktails and eating canapes, guests were entertained by jazz- The Dan Barnett Band.

The coasters were designed by Ria and printed with “Eat, Drink, Marry, Craig & Ria 10th October 2008”. The red cocktails matched the colour scheme of the day. The delicious food was catered by Culinary Edge.

Vases of blooms tied with striped ribbon decorated every space.

At 7.30pm, the screened off section of the Harbour Terrace Room was opened up to the guests. Everyone moved inside (this was the “ship” of Ria and Craig’s “boat”) for a cocktail reception and speeches.

A lolly buffet was created for guests to feast on! Craig’s family spent days making Italian Terronie (their Christmas specialty), rocky road and hundreds of other lollies. Ria provided brown paper bags stamped a ship’s steering wheel, a ship’s anchor an a “thank you”. Ria spent hours stamping the bags and tying them with red, white or navy ribbon.

The nautical inspired cake was made by Unique Cakes.

In his speech, Craig gave Ria “a rock for life”. During their 10 year long relationship, Craig has always collected rocks from places he has been and Ria has kept them in a jar. When he proposed he gave Ria a large quartz stone which he had found on the family farm, the one he gave Ria on their day wedding was from France – the furthest he has ever been from home.

As a surprise, Ria organsied a photobooth from funbooth for guests to use! She has it covered in a large black sheet and unveiled it after the formalities were over. The funbooth operator cut photos into strips for the guests  and placed another copy into a book for guests to sign as a guestbook .

Ria & Criag had their photos taken with  “Thank You Very Much” signs to send to guests as their thankyou card.

In their midst of her planning, Ria had forgotten to tell Craig who said to her halfway through the reception “Hey do you know there’s a photobooth here?” He had the most amazing time with it!

Ria and Craig danced their first dance to “In The Mood” by Glenn Miller. Once the band finished at 10.30pm, the DJ started and played songs requested by guests on their RSVP cards. Ria changed into a shorter fun party dress and hit the dance floor with her new husband and guests, partying until 2.30am.

Congratulations on your marriage Ria & Craig and thank you Ria for sharing your beautiful wedding day with us today on Polka Dot Bride! 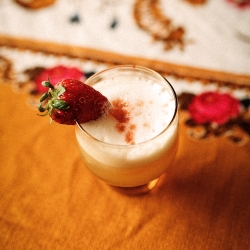 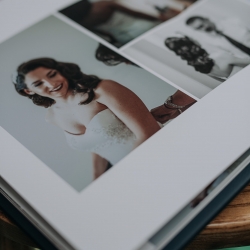