The wedding of Laura and Matt tok place at one of Australia’s most beautiful towns- Byron Bay. The place where you go to unwind and in Laura and Matt’s case, marry!

Guests at the wedding were served bottles of sparkling water with a label telling Laura & Matt’s story. Laura recounts it, “‘Life has a way of falling into place. After early chance encounters, marriage was not in the air. It was not until after meeting once again at a mutual friends 30th years on. Next morning Laura awoke to find a surprise guest in their share house and later in the day after Matt left, a love letter was found. The first of their many adventures began on a hot summers day with the idea of running 10kms in Wilson Prom. With love in the air, they were off with no more than a bottle of water and a packet of sweet chilli tofu. The adventurers arrived back at the car nine hours and 40km later, dehydrated and exhausted, yet somehow still laughing. Laura had taken them on a shortcut. In October 2010 they took off for a holiday to Sumbawa, Indonesia. After an epic day surfing, a sunset dinner in a local hand build restaurant, followed by a stroll on the beach, Matt proposed. Laura said YES. And so here we are! The beginning of another great adventure. ‘

Photographs today are by Sayher Heffernan who flew from Melbourne to capture the wedding. I always love Sayher’s beautiful, artistic eye and the clear details and moments he captures.

Siobhan Frost created the invitations and stationery for the wedding.

The couple saw each other before the ceremony, in keeping with the relaxed vibe of the day.Laura explains “Both Matt & I wanted a simple and relaxed wedding for all our guests to catch up, meet each other and enjoy the night ahead. We got our photos taken before the ceremony so we could spend more time with our guests who had all travelled from somewhere to get to Byron.” Laura chose an elegant gown from Lisa Ho.

Of their photographer, who they flew from Melbourne. Laura says “We chose Sayher for his raw-natural approach to photo’s. We wanted to capture the day in its natural environment. Sayher was absolute a treat to work with, professional, personable and stress-free. He was up early getting photo’s of the boys surfing, with us for the day getting ready and took some amazing photos of friends and family later on at the ceremony and reception.”

Of her walk down the aisle, Laura remembers, “Our musician Luke Matthews played a song I heard on Offspring – ‘Sister’ by Jamie McDowall. It put myself and bridesmaids (two sisters and two close friends) into tears walking down the aisle.”

Laura and Matt held their ceremony and reception at the Byron Bay Surf Club. Laura explains “The Byron Bay surf club appealed to us with its wooden interior and open deck overlooking Byron’s main beach. It comes as an empty shell which allowed us to decorated as we wanted, catered for our 125 guests and enabled us to have our ceremony and reception at the one place. Being an empty shell it did make a bit of extra work organising cutlery, crockery, linen, extra tables, serving dishes etc. Another plus was the ideal location being so close to the centre of Byron, allowing family and friends to get there easily and head out after the wedding.”

The reception tables were covered with simple natural elements Laura explains “The glass jars on our tables were filled with cuttings and flowers collected by my cousin from her and her neighbour’s yard. The bouquets were also handmade by my very creative cousin. Our table settings and napkins were prepared the day before with 10 friends on hand to help. We gave each guest a glass bottle of sparkling water which were antipodes bottles re-stickered with a story of Matt & I. The wooden blocks we served food on were hand cut and oiled by a good friend. Hessian table runners I bought in bulk then measured and trimmed.”

The decor was sweet and simple. Laura says “We took a minimalist approach to decorating opting for small jars and pastel colour flowers to help lighten the room, while using the bomboniere’s, hessian table runners and serving blocks to add a natural look to the tables. I had a picture of everyone sitting down to a big feast, passing food around and sharing stories which we made work by having three long rows of tables and mini banquets of food at each table. The marquee on the deck helped to give an elegant look for the ceremony and the cocktail furniture provided spaces for people to sit down and mingle. Couldn’t have asked for a better wedding!”

The cupcake wedding tower was created by Greg’s Cakes .

The wedding was catered by Catering By Sharon. Laura recalls ” I can’t speak highly enough about Sharon. She and her team put on a feast of food with great service. We had 4 canapés after the ceremony followed by a banquet of food on each table for our guests to share. Braised Beef Cheeks, Crispy chicken breast on Asian greens and a vegan homemade pumpkin ravioli served in a salsa with extra sides. Guests were raving about the food. It felt like one big Sunday dinner!” 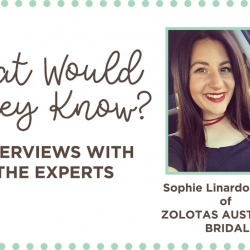