by Petra of Pomp and Splendour | Flower Wisdom, Wisdom

The classic and much loved tulip has a very interesting history. Most of us think of Tulips as originating from the Netherlands however, it has been discovered that the first bulbs were likely to have been from countries across a narrow band from Northern China down to Southern Europe.

Turkey has a long history of tulip obsession. During the Ottoman Empire in the 1500’s, Sultan Suleiman encouraged the cultivation of Tulips across the kingdom because of his love and adoration of the flower and in the years to follow there was even a period later known as “Age of the Tulips”. This was a time when it was believed that the Tulip was a symbol of wealth and prestige. The Turks were the first to hold full moon tulip festivals with an abundance of flowers, crystal lights and festivity.

It wasn’t until the late 1500’s that Tulipomania hit Europe. The flowers were fabled to be the most beautiful in all of the land and a craze began that lasted for almost a hundred years called ‘Tulipomania’. The bulbs were traded for ridiculous prices, Tulips were grown in secret to avoid theft which was rife,  moralists and religious figures warned against the obsession with worldly things yet everyone still wanted Tulips!

Sometimes it still feels a little like Tulipomania at the Melbourne Flower Markets at this time of year. Yes, it’s true that it is Tulip season and that they are in abundance at the moment, however I watch all the florists rush for the buckets of parrot tulips, humbugs, double tulips and other hybridised specialty Tulips to try and get the most unusual varieties. Everyone wants to get their hands on the most beautiful Tulips. Some things just never change!

Ms Gingham says: It’s such a popular flower and absolutely stunning. No wonder people went crazy when they first saw it! Thanks for the interesting article Petra! 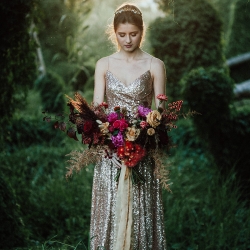