1. We don’t need to get married to ‘sanctify’ our relationships any more, or to allow us to live together or have children. But we keep getting married. It must be because there is something inherently valuable in it, at least for those who choose to do it. Don’t let anyone tell you that it’s archaic or unnecessary – ever. Let them make their own decisions about their relationship, and value your own.

2. This one’s about the wedding. Choose things that you know you’ll feel fabulous about forever, even if no-one else would recognise it.

3. Some couples already have merged finances, and some keep their’s relatively separate forever. If like us you saw marriage as a convenient point at which to combine your cash, make sure you have explicit discussions about who, what and when so that your putting expensive hair product in the shopping doesn’t cause a mini-row over the definition of ‘grocery money’ (this didn’t happen to us. However words may have been exchanged about who pays for 6-weekly haircuts and colours, and where the money for Saturday night beers with the boys should rightly come from).

4. If one or both of you are going to change your surname, it takes a lot of effort. Buy a kit that tells you all the ins and outs and provides you with forms all included – and change your drivers license first. If you do your passport within a year of the wedding it’s free too. Ooh drat, forgot to do mine in time.

5. Post-wedding, you may be hit by a highly serious viral condition called Project Fever. I had a near-terminal case. My symptoms were that after the wedding: we travelled overseas for five weeks; I took on a promotion in a work area in which I had no content knowledge; attempted to keep post-graduate study up; applied for a home loan; went house-hunting; bought  a house; spent a month renovating the house after work each night; found out I was pregnant halfway through the renovation; rented out our old house; moved house; undertook a month-long bathroom-laundry renovation without use of same; created a nursery out of the junk room; undertook more house fixer-upper jobs; filled two skips with stuff from the garage; and prepared for a year of maternity leave. There is no known cure for Project Fever except a month-long holiday in Tahiti. If you are unable to take this antidote, then be prepared to be very very busy after the biggest party of your life is over.

6. We looked back on our wedding video recently, and realised that we were much much thinner, tanner, fitter, and our teeth were pearly white. We’ll never look like that again. Be glad that you did on the day you were most watched and recorded, and then get back to your glass of wine and chocolate.

7. You’ll still fight. You’ll still get annoyed that he is incapable of unloading the dishwasher, and he’ll be annoyed that you leave your clothes all over the bedroom floor. Marriage isn’t a panacea for all that was less than sparkling in your relationship before you got hitched, and it shouldn’t be. Marriage is real life. It’s going to Bunnings on Saturday morning. It’s asking if we’ve run out of cat food again. It’s the weekly vacuuming and folding laundry and spending your money on horribly boring things like whipper-snippers. But it’s still marriage and it’s still with the person you love the best, and that’s why we do it.

8. It’s ok to giggle a bit when you’re called Mrs, even a year later.

9. Other people will be just as excited about their upcoming weddings as you were. Give them the same listening time, interest and excitement as you would have wished for yourself.

10. While guests have a year to give the newlyweds a gift, you do not have a year to write your thank you cards. If you haven’t done them yet, this really is make or break time.

11. After marriage it is inevitable that some people will think it acceptable to enquire about the state of your reproductive organs, and the state of your sex life. That is, they’ll ask when you’re having children. You may not want children yet, or ever, or you may want them and be trying, or you may be having difficulties getting them. None of these things are anybody’s business except yours and your spouse’s and whoever you choose to share them with. Despite any good intentions it is appallingly bad manners and terribly invasive to ask such questions (imagine if the question was about the state of your bowels! You wouldn’t just explain it away as a well-intentioned enquiry then!). You are entitled to reply in whichever way will be most satisfying to you: ignore the question (“Have you tried this hummus?”), respond in kind (“Thanks for asking. By the way, how are your haemorrhoids?”), respond with disdain (“My goodness, what a question.”), or respond with outright lies (“We’re awaiting the arrival of the Moon People from Planet Zargon to decide. We think it’s only sensible to see what our new overlords have to say.”).

12. You’ll get lots of advice. Ignore any and all advice about marriage that you think is stupid. Including this.

All photographs by Dekuji Photography.

Bride’s bouquet by The Bouquets of Ascha Jolie.

Ms Gingham says: I’ve been married… hang on… I’m seriously counting now… 13 years phew! I wholeheartedly agree with everything Rachael has just said. Can I add that if you do end up deciding to have children the rude questions don’t stop… they just get ruder. 😀

Miss T says: “Organised to the max; fan of all things sparkly and organic; vegan (but no hemp or dreadlocks); proud mama to a Chihuahua princeling and two snooty cats; drinker of beer; and thrilled to her little cotton socks to be marrying the sweet, silly, smart and snuggly Buzz.” 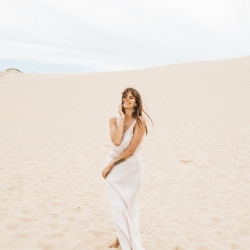 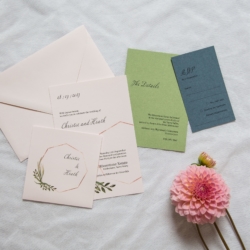