Although Chris and I are both born and bred in Sydney, we decided to ask our photographer, Daniel K Cheung of Sutoritera, to accompany us back to where Chris proposed: the gorgeous homestead property of Poachers Pantry, a smokehouse cafe in Hall (which is a lovely spot just outside Canberra).  It was the first time we’d gone back to the scene of the proposal since it happened, so it brought back some pretty special memories for us.

Generously, Daniel said yes – and we’re so glad he did! The photos he took told a story of the day, so what we got weren’t just photos but hilarious, fun memories. Not only did we have a really great road trip, but we discovered some beautiful plots on the property which seemed to have been made for Autumn. Whatever people may say about Canberra, it sure is pretty!

Chris told me that his proposal was a comedy of errors. On the day, it seemed to me to have gone off perfectly. Little did I know that he and his brother (who came down for moral support) ran out of petrol on the way down to Canberra! This meant that they almost ran out of time to have everything in place by the time I got there (Chris had tricked me into thinking I was going to meet a friend for lunch). Having left it all to the last minute, Chris got his brother to paint a sign with my name on it for me to follow (which of course I didn’t!). By an unexpected turn of events, I discovered his brother hiding in their car in the Poachers Pantry carpark before I went in – and was pointed back in the right direction. Although the sign didn’t really do its job, we had to keep it for sentimental value!

Chris and I met 3 years ago at a party above the huge Coca-Cola sign at Sydney’s Kings Cross. Unbeknownst to me, one of my best friends had gone behind my back to set me up with this guy she’d known all her life, and whom she’d wanted me to meet for some time. From our very first conversation, it became apparent to the both of us that a) there was a spark! and b) it was a miracle that our paths had never properly crossed before. We knew a lot of the same people, lived only 7 minutes away from each other, had attended the same university, and had even interned at the same firm at one point!

Although there were some lovey-dovey shots (of course there had to be!), we thought Daniel really captured us… which is why there were so many of us mucking up and laughing. (Those were my favourite ones!)

Daniel got us to do some homework before we had our photoshoot – he asked us to write each other a love letter which we read out and record separately on the day.  We were both pretty reluctant to do it at first, and were surprisingly shy about it! Neither of us told the other what we’d written.

Very soon after the shoot, Daniel gave us a slideshow called a “Love Letter” – in which he’d handpicked some of the photos we’d taken that day, put it together as a slideshow, and set it to our recorded love letters. It was such a simple concept, but really amazing. It gave us a chance to say lots of things which normally go unsaid, but are really lovely (and probably important!) to hear from the person you love.

We haven’t shown it to anyone yet and we’re not sure whether we ever will! It’s something we’ll definitely treasure in the years to come.

Ms Gingham says: What a fantastic idea to give a slideshow with so much thought behind it! Thanks for sharing your beautiful story with us Audrey!

Audrey says: “By day, I work in the legal space – though outside of work, I love reading books, meeting up with friends for a cheeky coffee and cake and trying to resist my fiance’s attempts to get me into sport!” 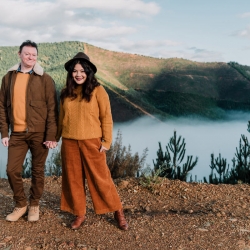