There is nowhere quite like St Kilda in Summer- ice cream, salty sea breezes, dodging bikes as you wander in the sunshine. So I think Tomka and Andrew chose a beautiful time of year for their St Kilda wedding!

Tomka tells their story. “We were introduced through a friend in Melbourne, we then bumped into each other walking down Brunswick Street a few months later. We then ran into each other again a few weeks later, Andrew being as persistent as he was, we started dating. Andrew was leaving in 3 months on an away ticket to travel around Asia on his way to live in London. When Andrew left we decided to go our separate ways. We met up in Mexico 7 months later and picked up were we left off. Andrew moved back to Melbourne 3 months later, and the rest as they say is history!”

“My dad passed many years ago so having my mum walk me down the aisle was so important to me. ”

“The “official” first dance was done at the venue, however as is tradition at a Serbian wedding (my background is Serbian – Tomka) we danced “kolo” with our family outside the church. The Serbian dancing “kolo” is fantastic & I think, set the scene for the party ahead & we loved that everyone joined in the Serbian dancing during the night.”

Of their photographers, Tomka says, “Brett was absolutely amazing, such an incredibly cool and talented photographer. A friend sent me photos to a wedding she went to & I asked who the photographer was as I was so impressed with the work. We set up a time to meet the dynamic duo Brett & Jane, and after meeting them both Andrew & I felt we had to work with them. It was just a feeling we had, there was no sales pitch it was just like having breakfast with friends, besides, the work speaks for itself! Brett made us all feel so relaxed on the day, there was no posing, it was all about natural photos which was incredibly important, none of this being dragged around different locations. We didn’t even notice him around for most of the day, Brett just went about his business. When we received our photos we were blown away with how natural they were, and they were exactly what we wanted and exceeded our expectations.”

Tomka and Andrew held their reception at Royal Yacht Squadron, St Kilda  with catering by Food & Desire . “All of our vendors were absolutely amazing, absolute professionals, every single one of them. They made our day so relaxing & fun, I now realise how important it is to choose the right vendors, it makes such a big difference to your day. I can not recommend any of them enough, the caters Food & Desire were outstanding, the service was second to none and the quantity and quality of food (which was very important to us) was fantastic.”

The Style Co held together the styling for the day, styling the reception, the invitations and stationery, the favors and the wedding cake! Tomka notes, “The Style Co are the most creative, talented, patient and beautiful bunch of girls I have met, every single detail was amazing. We had so many compliments and comments just with the Save the Dates and the invites, let alone when people actually arrived at the venue.”

“We loved sneaking away straight after our speeches to leave our guests to enjoy their main meals, we went out for Sunset photos, just the 2 of us, it was nice for Andrew & I to have time to ourselves to reflect on the day so far and to have a drink together to celebrate us, our day, our families, our new journey as husband & wife!”

“Our first dance was beautiful, we were very nervous, we had 3 lessons and didn’t take into account the back of my dress so it was very much small steps. I was quite relaxed by the time we got going, however I could see the concentration on Andrew’s face, which actually made me giggle throughout the dance. It was magical to dance with my husband surrounded by all our loved ones. Ben Harper – “Not fire not ice” was the song we chose, we both love so many different artists, however Ben Harper was the choice as the words are so significant to us and Andrew had learnt to play a Ben Harper song whilst in London & recorded this & sent it to me for my birthday!” 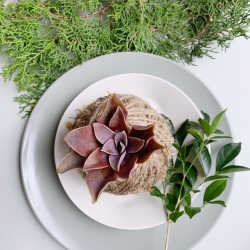