Ben and I met when we were teenagers (Ben was 17 and I was 15) at Ben’s parents’ house in Central Queensland. We starting talking and ten and a half years on we haven’t stopped. Three years later I moved to North Queensland for university and 12 months later Ben followed me. After graduation, I took a job in Victoria; Ben had to wait 12 months before he could move too.  Now we live in Victoria with our two Scottish terriers.

Ben proposed the weekend of his final visit before moving to Victoria. We had spent the day in Geelong and he had planned to propose at the beach but the Geelong Revival Car Show was on. I remember asking him why he was so quiet all day and had put it down to nerves for a job interview he had been to the day before. That evening we were getting ready to attend my work Christmas party, when Ben asked me to marry him. Of course I said yes!!!

It came as a surprise even though we had spoken about it over the years. I was never one of the girls who dreamed of their wedding as a child, my parents aren’t married and I had never thought of it as something that was needed. Ben always said he wanted to get married. I would joke with people who asked when we were getting married that Ben had talked me into it but I had talked him out of it! I did start to think of wedding ideas after meeting Ben though!

We decided to have the wedding locally rather than back in Queensland – we just needed the perfect location. We had decided that our wedding would be a celebration with a small group of family and friends. No theme, no two-colour ballroom set up. We wanted a location that would allow us to have the wedding ceremony and the reception we envisioned. Intimate, with good music, good food and good company.

Ben actually found Providence Gully on Polka Dot Bride! We met with the owner Clare and visited Providence Gully and I knew it was perfect! It had the beauty of the local area – with olive groves and open space –  and The Barn was perfect for the reception. Clare was fabulous, especially for a wedding rookie like myself; she was always ready to talk and allowed us to visit on many occasions. She worked with us, recommended vendors and allowed our decorative ideas to develop and become reality. Best of all Clare was able to let us come out the afternoon prior to set up exactly how we had envisioned things and was on hand through out the day.

The hardest part was finding the dress. I had no idea what sort of dress I wanted or what would look good, I had never really thought about it! I had looked in a number of shops and tried on countless dresses ( I actually lost count) both locally and in Queensland. “The dress” was the last dress I tried on at the local bridal shop, and by last I mean the last style and colour in a long line of potential dresses.

Big thanks to the Eryn and Melissa from Melissa’s Bridal, who were so wonderful. Eryn also did the hair and make-up for the day; she not only understood that I didn’t feel comfortable being ‘bridey’ but also helped me find the perfect dress, hair and make-up! My dress wasn’t white and I didn’t wear a veil ( I had a veil, but felt silly in it). Oh and my shoes were blue satin – I had bought them when I was 18 and had never worn them for fear of ruining them, so thought what better time to try them out ( I ruined them dancing all night!).

Our wedding ceremony was on a Friday afternoon in March. We had pews in the olive grove with the aisle lined with pinwheels. Ben and his groomsmen along with our guests arrived by bus and were greeted by the talented sounds of Arty-Rex – a local father-daughter duo from Melbourne. I knew Alex from school and was excited to have them be a part of the day.

We decided not to spend a large amount of money and refused to buy into the ‘weddings have to be expensive’ mentality, so we did a lot of the details ourselves. From piecing together the invites ( some parts were ordered online and others printed at home) to the layout and decor of the venue. Our flowers were bought at the markets the Thursday before the wedding and arranged by myself and friend Sarah. We collected jars to hold tea light candles in for months prior.

After the ceremony guests were invited to refreshments, canapes and lawn games while Arty-Rex played on. We opened the barn up so people could find their seats early and start documenting the night with the polaroid guest book. We wanted to continue with relaxed, family vibe so we had two long tables for seating, with the bridal party and guests combined.

We didn’t want to decorate to a theme, rather use the natural beauty of Providence Gully and decorate the tables with flowers and lights. Ben hung lights inside to create a sparkling ceiling and lights outside to create areas for people to mingle which still allowed them to enjoy the music and sights on the dance floor.  My sister Elysia took our photographs; I don’t like having my photo taken, so having my sister take the photos helped my relax. My other sister Dominique and I made the wedding cake whilst hand-made programs doubled as paper fans.

Sweet Things by Caroline, a local market find, made our favours; Belgian chocolate pops! We had Hudson’s Famous cater the evening, they were obliging and the food delicious. Dinner was banquet style, with food placed along the tables. After the cake cutting and bridal waltz, the self-serve dessert bar opened and we danced the night away! We loved our wedding day because we did it our way and it paid off. Only regret was that it was over too soon! 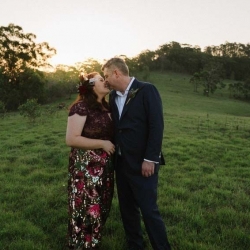 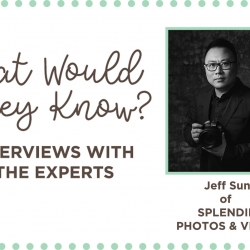