5 Best Places to Catch a Sunrise in the Whitsundays

Captain Cook may not have been known as much of a wordsmith, but he did a pretty good job naming that part of the Queensland coast the locals affectionately call the “Whitsunnydays”. If ever there was a place that offered a million and one vantage points to capture the perfect sunrise, this is it.

There’s something about sunrises that makes climbing out of bed in the dark and fumbling for the iphone simply worth it. So peaceful, calm and removed from all those crowds that clamber to catch a sunset, perhaps the best thing about a sunrise is you generally have it all to yourself. Whether it involves hiking up a mountain top or just strolling out onto your balcony, there’s no better way to start the day than with those first sprays of pink light bursting from behind a mountain.

So where are the best Whitsunday spots to enjoy the ultimate communion with nature? At Botanica Weddings, here are our Top Five, in no particular order.

Your balcony at Pinnacles, Airlie Beach

Although it’s situated on Australia’s east coast, the lively tourist mecca known as Airlie Beach is a bit of an anomaly in that the town itself swings around to face north. So every day it offers up both a sunrise and a sunset. But what really sets it apart is its elevation. While it’s named after its beach, only the esplanade and main street occupy flat land. Most of the town climbs pretty quickly from there offering a huge range of accommodation that by and large all boast spectacular views. The panorama to the east is framed by the Conway Ranges and where ever you stay you can be assured of catching the sun popping over the mountains at any time of the year.

TIP : Best vantage point? The choices are endless but it’s hard to go past the aptly named Pinnacles. It’s a climb (so make sure you take their complimentary buggy) but worth every step once you get there.

Off the deck of your own catamaran

The tropical waters of the Whitsundays are well up on the short list of best cruising grounds anywhere. Justifiably so. Dramatically mountainous looking islands, clear skies and water with spectacular coral and fish. Daily glimpses of turtles, dugongs and the occasional whale and, if you look up, sea eagles and brahminy kites. But the other great instagram-worthy moment of course is the sunrise which can be enjoyed on any morning from just about any tranquil anchorage point.

TIP : Best time to catch it is during the drier months from April through to December when there’s less chance of it being shrouded in cloud.

The Whitsundays is famous for its 74 islands, but most of those are uninhabited nature reserves, with the exception of a handful of island resorts, the best known being Hayman, South Molle, Daydream and Hamilton Island. So which one to experience the sunniest rise ? It would have to be Hamilton, or Hammo as the locals call it. And yes, you’ll probably want to rename your hamstrings, “hammo-strings” after the two and a half kilometre climb up Passage Peak but for the ultimate start-at-dark sunrise pilgramage! Yes, it’s a hike, but that’s exactly the point, you have to make an effort to enjoy the ultimate reward. And by conquering the highest vantage point on the island – 200 metres above sea level – you are guaranteeing yourself a moment that is definitely soul-stirring.

An hour and a half drive from Airlie Beach but worth every minute of the detour is Cape Hillsborough, an affordable beachfront resort and the ultimate place for lovers of peace and tranquility. The sunrise experience here comes with the added bonus of a furry foreground in the form of very friendly skippies.

TIP : Bring your camera ! The local kangaroos don’t seem to mind you taking some happy snaps while they do their marsupial yoga on the beach.

The Sea Deck at our exquisite wedding venue is renowned for its sunset cocktails (anyone for a Blushing Bride martini ?) …but in truth, this east facing deck is even better situated to enjoy the ultimate sunrise. With a foreground framed by spikey succulents, and beyond that the dramatic black granite boulders fronting the calm waters of Pioneer Bay, the stage is set for an early morning show of nature at her magnificent best.

TIP : The only hitch is you have to get hitched here to enjoy it, but some would say that’s a small price to pay!

Ms Chinoiserie Says: I love the Whitsundays! Absolutely one of the most beautiful “picture postcard” places to watch the sunrise with your beloved….

About Botanica Weddings: Perched on the edge of the Coral Sea in the glorious Whitsundays, Villa Botanica’s superb gardens and architecture make for a destination wedding venue simply unmatched anywhere in Australia. Only minutes from Airlie Beach, yet totally private and exclusively yours for the day. 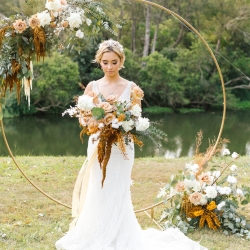 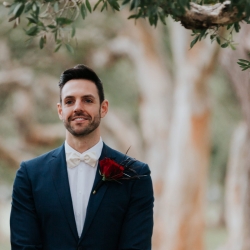