There is something to be said for a classic wedding with tuxedos and ballgowns. A certain kind of magic if you will. Claudia and Ben celebrated their classic Canberra wedding with just that – opting for a day, that as they explain “was important for us that everyone was able to laugh and smile throughout the day while encapsulated by feelings of love and intimacy. ” Claudia and Ben chose gm photographics to capture their day.

Claudia and Ben tell us the tale of how they came to be. “We met in winter 2013 through mutual friends on a night out in Canberra at Knightsbridge penthouse. Affectionately known as Knighty’s, it was their annual birthday celebrations – holding a safari themed night. Ben was dressed in a wolf onesie and Claudia was out celebrating a friend’s birthday. The girls were at the bar chatting about what they liked in men, one for Claudia was a real man’s chest, and Ben’s timing was perfect, having just come to the bar to see one of his mates from riding, who was out in the group with Claudia. In his wolf onesie and exposed chest – how could a girl resist?! Claudia rubbed his chest to demonstrate what she meant by real man chest and the rest… is history. It was only fitting that we held their engagement party at Knighty’s in May 2016.”

The bride wore a gown by Velani which she found thanks to The Style Agency. She explains “The Style Agency were amazing in assisting me to understand what fabrics and styles were suited to my body and budget. Torn and unable to decide between two wedding gowns, I discovered that I would need to have my dress designed. Through introductions to designers via The Style Agency I met Nicky at Velani and instantly fell in love.
I had always wanted a princess-style dress for the ceremony that would embody the romantic side of the occasion; yet also wanted a more sleek and sexy style for the reception (party time). My custom Velani dress was a sleek mermaid gown, made from French corded web lace with beaded lace appliquéd to create a second dimension. It had a removable overskirt with several layers of tulle and beaded lace appliqued in a cascading design. A circular cathedral length veil completed the look.”

Ben and Claudia chose to marry at the modern National Arboretum remarking “We wanted to use locations that are not only iconic to Canberra but also hold meaning to them.
Being an avid mountain biker, Ben often passes through the XX at the National Arboretum and with its glorious views outstretched of Canberra, the hilltop pavilion offered us  the perfect backdrop to speak their vows.”

For the walk down the aisle, Claudia remembers “I walked to an acoustic version of “All of me” by John Legend. Simon Anau Music (who joined us with his band Small Town Funk for the reception) was set to play it live on his guitar for the bridesmaids and bride; however, on the day, Simon had organised for one of his band members to play it also on the piano so that we were able to walk down the aisle to the sound of piano keys, together with Simon singing with his guitar. That was incredibly special and a most wonderful surprise.”

Claudia adds “One of the most timeless traditions in any wedding is the father of the bride walking his daughter down the aisle and into the next chapter of her life. For both Ben and I this was a special moment – it was my father confirming his love and support for my to-be-husband, knowing that I will be looked after always; yet also the single moment between me and my father Bruce, just before walking down the aisle, where he squeezed my arm gently, smiled and holding back a few tears, told me how happy he was.”

Mary-Anne O’Sullivan officiated the ceremony, the bride noting “We wanted an intimate ceremony shared by family and friends. The celebrant Mary-Anne O’Sullivan said early on – ‘I think one of the things that struck me the most about their story was the honesty, warmth and especially the humour between them’. This perfectly summed up how the ceremony played out – love, laughter, and a fun reading from my niece and nephew (Annika & Daniel) reading a passage from Dr Seuss’ Oh, the places You’ll Go! It ended with this passage – Love one another and you will be happy, it as a simple and as difficult as that.”

Claudia tells “My favourite photograph has to the one taken inside Turrell’s Skyspace at the National Gallery of Australia where we are posed at the entrance to the viewing chamber while the bridal party can be seen on either side in the background. The colours are amazing – the blues, pinks, purples – knowing that at no point in time will it ever light up from the sun in the exact same way as time passes.”

Of their photographers, Claudia and Ben remember “Despite being based in Sydney and the wedding being in Canberra, we knew early on that they wanted GM Photographics as our photographers having seen many photos showcasing their wedding coverage in print and online. Tim & Sarah came down the day before to scope out the venues & photo locations and surprised the gents by taking a few photos as they were getting their cut-throat shaves at the Barber. They also joined the entire group in the evening for a few drinks which was great fun and also gave the bridal party a chance to meet the photographers they would be spending the following day with.”

Reception celebrations began at Pialligo Estate, the newlyweds remarking “As one of Canberra’s leading hatted restaurants, it was simply a no-brainer choosing Pialligo Estate as the reception venue. We hosted afternoon canapes, drinks and outdoor games including giant jenga, croquet and finksa on the lawns while being serenaded by acoustic songs performed by Simon Anau Music. Just before another beautiful Canberra sunset, guests were invited in Pialligo’s Glasshouse – a purpose built Marquee for a formal wedding reception.”

For their first dance, the newlyweds remember “The band played “Powerful” – a Major Lazer song, featuring Ellie Goulding. This is a shared favourite of ours; the lyrics easily describe our passion for each other – “There’s an energy, when you hold me when you touch me, it’s so powerful.”

Congratulations on your marriage Claudia and Ben! Thank you for sharing your day with us! Thank you to gm photographics for sharing today’s celebration! 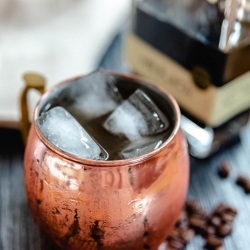 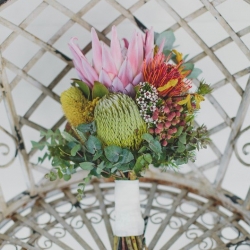