Marrying your soulmate in a romantic Sydney wedding and celebrating at an exclusive location sounds pretty perfect. As her six-year wedding anniversary approaches, Amy Darcy, founder of wellness blog Eat Pray Workout, remembers how lucky she and husband Reis, were to celebrate their wedding reception at Victoria Barracks Officers Mess in Paddington.

“We were married at St Stephens Anglican Church in Newtown and the reception followed at Victoria Barracks Officers Mess in Paddington. This is the oldest Army Barracks in Sydney and is really beautiful. This venue isn’t open to the public, just select Army Officers and from what I’ve been told, now that security rules have changed in recent years it isn’t possible to host a wedding here now. We feel very privileged to have had this rare opportunity to share with our guests. We had a lot of fun on the day and had THE BEST dance party in the courtyard under the fairy lights after dinner. Still the best dancing I’ve seen at a wedding (although I am slightly biased!).”

“I arrived at the church, before my husband did! He was still at the pub with his groomsmen and I was early (which NEVER happens!). Bizarre memory but me being early is a rarity! Haha.”

Rather than writing their own vows, the couple kept to tradition as this truly reflected how they feel about marriage. “We were married in the Anglican church and used the tried and true vows. I think they reflect what God intended marriage to be about really well.”

When asking Amy about the proposal she remembers how unexpected it was and how Reis always wants her to see her smile.

“I had just returned from 10 days on a cruise with 20 of my friends. It was summer and we were sitting by the pool at Reis’ parents house. My best friend got engaged on the cruise and when I shared the news with Reis he said, ‘that’s really good for them! I think it will be a while until we are at that stage.’ I thought ‘gosh, he has really changed his tune since I left!’. So I wasn’t expecting anything.

I was having a ‘fat day’ ie. feeling insecure about the new weight that I had gained from going a little overboard on the ‘all you can eat’ restaurants on the cruise (so good, but I definitely lacked self control at that time).

I was sitting on the side of the pool sulking around with my towel around me not wanting to get in. Really mature, right? Reis said ‘hey I’m just going to go and call Shiney’ that was his best mate. I was thinking ‘seriously?! Great time to pick to do that!’ He came back about 5 minutes later and got back in the pool on the steps in front of me. It looked like he was kneeling and I was about be a smart-alec and say ‘what are you going to do? Propose!?’ (thankfully I kept my big mouth shut – what a moment killer that would have been!) He then pulled out a ring that was more beautiful than I ever could have imagined (and I had worked in a jeweller for many years whilst at uni so I had a pretty good idea what I did and didn’t like!).

Reis said to me ‘You’re my best friend and I want it to stay that way for life. Will you marry me?’ I took the ring, dropped the towel, jumped on top of him in the pool, jumping up and down screaming ‘are you SERIOUS?!’ about a thousand times, with a lot of laughter and then a resounding ‘YES!!’. I found out later Reis had a massive plan with a song written and surprises etc for the following day but he just couldn’t bear seeing me upset, especially when he knew he had something that would fix it! It turned out far better this way because I had no idea that he would propose in that moment because I was expecting something elaborate to be associated with the proposal. It was really nice being at his parents house too because now every summer when we sit on the pool steps, we are reminded of that fun afternoon and the excitement that followed.”

Some say picking the wedding dress is one of the most difficult parts in preparation for the big day. For Amy, the first dress she saw was perfection.

“It was actually the first dress I saw. I looked high and low all over Sydney in both stores that sold off the rack and those that custom designed, but really liked this one and kept coming back to it. I loved the elegant simplicity and thought it was timeless. Plus when else can you wear a big dress like this?!”

And on advice for others about to tie the knot…

“It is only one day, so don’t feel you have to spend through the roof. Looking back on the day, the things we would have done differently were:

2. Not spend so much on the cake

3. Be less stressed about it all!

After her first and second wedding anniversary, Amy writes some extra lessons learned on her blog.

“We have now been married for 5 and a half years. Whilst we kept up the tradition of going away for our anniversary and talking about what we have learned I didn’t have heaps of new things to add. Last year though we had our first child and have learnt SO much more about each other and how to interact as a couple and as parents to our son. No doubt there will be plenty to write [on her blog] about on our 6 year wedding anniversary.”

Ms Zigzag says: Amy looks breathtaking walking down the aisle at St Stephens Anglican Church. Congrats to this happy couple who are about to embark on their sixth wedding anniversary! 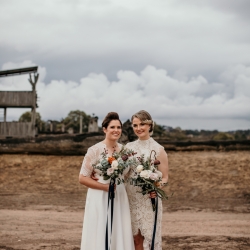