Groom fashion mistakes and how to avoid them

Picking out your wedding suit can be fraught with danger.

In fact, picking out any suit can be a bit of a minefield especially if you don’t speak fluent fashion.

Do you really want to look back on your wedding photos in 30 years and shudder at your fashion failure?

Well here’s the good news: I spoke to some folks in the know who kindly agreed to walk me through their most disliked groom fashion mistakes they’ve seen at weddings.

And while they all agreed that it’s about your personal style, they offered these tips to gently help you on your way.

You know when you get two independent fashion experts tell you basically the same mistake to avoid that you better sit up and pay attention.

And while both used varying language to make their point, they can be summed up in three words: don’t be boring.

Stylist Sally Mackinnon from Styled By Sally, says avoiding that “flat” wedding look is key to a successful outfit.

“For me, the biggest mistake is when there is no ‘interest’ or texture involved, so the outfit can look a bit flat,” she says.

“So even though you may have a completely black and white look, ensure there are textual differences in all the accessories, i.e. a silk tie with a self-print, a black sock with a pattern or a black pocket square with an interesting texture.”

“Sometimes guys try too hard to match everything by opting for the one solid colour,” he says.

“The best tip is to choose a range of tones and patterns that complement one another.”

Colours matter, get them right

Insitchu Weddings Manager Miles Ruge was all about the colours, and his rules were very simple:

“As a general rule, never ever match your shirt and tie, or shirt and suit,” he says.

“And if you pair a patterned shirt with a patterned tie, the former should always be the more apparent.”

That’s three easy-to-follow fashion gems for any groom at the start of his fashion journey.

Aussie model and fashion guru Sam Wines had no hesitation in naming his fashion faux pas.

And he should know, if you’ve scoured his Insta account, Sam is constantly dressed in the best threads going around.

So what’s his groom no-no?

“Luckily relaxed tailoring is on the rise and is becoming popular again.”

Love for the lapel

And while his fashion mistake to avoid is pretty specific, it’s still an important part of your look to get right.

“It’s a really kind of small but contentious one, but I really dislike skinny lapels,” Chris says.

“I think that look was really popular when we first started – a disproportional skinny lapel.

“I always look at that period and say that it’s definitely not going to stand up over time.

Playing around with proportions is a risky move.

And there you have it! Some very basic advice which for some reason so many people fail to adhere to.

Stick to the above and you’re not only guaranteed to look slick on your big day, but you’ll also avoid that cringe in a few decades time when you whip outthe wedding album to show the kids.

Ms Zigzag says: Buying a suit for one of the most occasions of your life is not something you do often, so having these fashion-forward tips from the experts handy are just what you need to read before you go shopping! 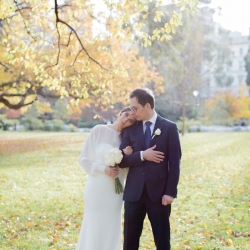