It was an autumn Easter weekend that set the scene for Grace and Tom’s city chic wedding. With just 18 of their favourite people on the guest list, their dream was for a day that was intimate, cosy and filled with chocolate (thanks Easter!). Beautiful, rich-toned blooms and plenty of sentimental details were all captured with impeccable style by White Vine Photography.

The couple, who met while Tom was in military training, were engaged on a beachside walk. Grace fills us in. “I had been commuting to Brisbane from Melbourne for five years after Tom got posted in the military to Brisbane and I couldn’t get a transfer with my work. After I arrived home from a work trip to China, Tom took me out for coffee and we went for a long walk along one of our favourite beaches. It was a sunny day and I remember there being a lot of parasailing and windsurfers on the bay. Tom asked me on the beach with a stunning marquis diamond – it was perfect!”

The bride chose two gowns for the wedding, a lace Made With Love gown for her walk down the aisle and a chic Chosen By One Day piece for dancing. She explains, “I choose a lace gown with an open back and low front to suit my personal style and the garden ceremony. I knew the detail in the dress would complement the surrounds and the flowers we had chosen. I changed into a second gown because the reception venue was more black tie and I wanted something easier to move and dance in.”

Such an intimate day was filled to the brim with personal touches. Grace notes, “My mother gave me a small book that was given to her by her mother which was incredibly sentimental to us both and I will pass it down to my daughter one day. My mother also gave Tom a tartan handkerchief which was my grandad’s to reflect my Scottish heritage.”

Grace says, “As the father of groom couldn’t be there, we surprised the groom, as his father designed some cufflinks for Tom. I loved them so much, I got my dad some also.”

Grace and Tom chose Treasury Gardens in Melbourne for their ceremony, greeting guests with fresh hot cross buns from Laurent Bakery as a nod to the Easter weekend. Grace tells, “We wanted an incredibly intimate wedding with just 18 guests, so we chose a small garden ceremony in the heart of Melbourne at the Treasury Gardens which had incredible natural light and a peaceful ambience with the waterfalls overlooking the JFK memorial.”

The bride walked down the aisle with her father to Sam Smith’s “Latch”.

Autumnal blooms were a highlight of the ceremony, styled beautifully by Flower Jar. Grace remarks, “The brief for our florist was ‘To reflect a modern, rustic feel’, using lots of native gums, proteas, and seasonal blooms in different shades of burgundy, marsala, magenta and pops of lighter pinks and dark green foliage. We had autumnal blooms which included dahlias, hydrangea, King Proteas and blown roses – amongst others!

The showcase piece was our asymmetrical arrangement at the ceremony in place of an arch. Behind where we stood we had two asymmetrical arrangements, with the right-hand side having a curve at the top – to give the illusion of an arch. These had dark green foliage with burgundy, marsala, light pinks and whites, with some gums and native flowers like King Proteas in pinks and seasonal blooms like dahlias and blown roses.”

Eres Akguner officiated proceedings, Grace tells, “We wanted a private and intimate feeling that reflected how important our family and friends were to us. Having been in a long distance relationship for five years everybody that was present impacted, helped and shaped who we were and helped us through our challenges. We wanted the ceremony to reflect our personalities and we were married by a close friend who was able to capture that in his stories about us and our vows to one another.”

“From our initial meeting we both knew Daniel and Alex were going to bring our day to life for many years to come,” tells the bride of the couple’s photographers, continuing, “Both are incredibly talented, creative, hard-working and professional; we felt at ease throughout the entire process and never had any stress whatsoever and boy did they deliver! They exceeded our expectations beyond any limit and we are just over the moon with the final outcome.”

“There is a photo of Tom and I on the tram tracks which was completely spontaneous as we were crossing them. I think it really captures our love for the city and each other.”

Grace and Tom chose the sky-high venue of Vue De Monde to kick off an evening of festivities, the bride tells, “We wanted our friends and family to have the best food and wine and to come together for one big lunch after our morning ceremony. So naturally, we chose a venue that showcases Melbourne from the 55th floor with sweeping views over Port Phillip Bay – Vue de Monde. We chose the Lady Nelson and Darwin rooms combined to be able to have one long eight metre dining table as if we were at my mum’s house on a Sunday.” Each guest was gifted a chocolate bunny from Haigh’s Chocolates.

Grace tells, “Being a small wedding I asked my brother to be MC – he did a fantastic job as he flew in from Spain the day of the wedding and was running purely on love and caffeine.”

The newlyweds took to the dancefloor to the tune of “If I Ain’t Got You” by Alicia Keys and Usher. “Tom and I practised the foxtrot to YouTube videos and didn’t tell anybody we were going to try a self-taught dance. We had a lot of fun in the lead up to the wedding with the trial and error moves!” tells the bride.

Congratulations Grace and Tom! Thank you for sharing the beautiful stories of your day with us. Thank you also to White Vine Photography for sharing today’s celebration! 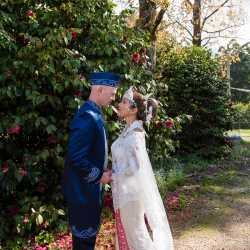 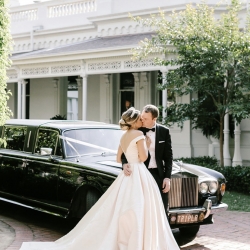