An extremely thoughtful and romantic proposal in the heart of Melbourne? In the city’s iconic laneways, no less? Tell us more! Jan, who was visiting Australia from South Africa, popped to the question to Megan with a little help from some street art by Ashley of K.I.L. Productions. And there to capture the day in all its beauty was the talented Candid Chaser. Below, the groom-to-be, Jan details how the proposal went down and reveals the meaning behind the art.

So I decided to ask the big question during the festive season as we were in Melbourne visiting my sister, who recently immigrated to Australia and bought a wine farm in Beechworth renamed Glenbosch.

I wanted to do something unique and I decided that incorporating iconic street art would be the perfect way as the street art throughout the city has always amazed us.

We started the morning with a relaxing river cruise and then we made our way back to the hotel so that my unsuspecting, soon to be fiancé, could freshen up for our ‘photoshoot’ which I had used as an excuse to get her dressed and to the spot where we were to meet the photographer, Ashley, at exactly 4pm for the grand surprise.

We hopped onto the tram that stopped just before the entrance of Union Lane and followed the directions as given by the street artist, coincidently also named Ashley. We walked up to an alley and turned right into our future written on the walls of Union Lane.

Megs looked at the wall for a second, looked back, and with a huge question mark on her face she realised what was happening. When she looked back at me I was on one knee, where I stayed for quite some time before she managed to utter a teary eyed, “Yes!” Yes, she said yes! A song started playing in the background, also Afrikaans, and everything kind of blurred out from there but I must confess that it was hands down the best moment of my life and hers.

The street art has very significant elements in it that is unique to our relationship.

The question starts with the name of the girl that stole my heart. The rest is written in Afrikaans, which makes the message personal to us and to our surprise more people understood what was written than expected.

The dolphin is Megan’s favourite animal. We were once standing on the balcony of her parents’ beach house when she saw the dolphins for the first time that long weekend. She became so emotional about it and I was awestruck by the kindness that bubbled out of her. We had come to the conclusion that the only word that could describe her emotional state was the Afrikaans word ‘bewoë’. That was the day that I decided I was going to marry this girl.

The lighthouse represents our relationship. We only started dating mid August, but in this time a lot had happened. At our local church, where we get guidance on how to build a long lasting relationship, we got a lot of input from our peers and more than once from totally different groups we received this word/vision from others that see our relationship symbolising a lighthouse to the world. Some call it love at first sight, we call it divine intervention.

With these two elements the rest of the art had to be a nautical theme, with the sun also being a symbol of our Saviour that made all of this possible.

Ashley of K.I.L. Productions did an outstanding job and with all the adrenaline flowing, Megs was kissing me and hugging Ashley as she couldn’t really say much. Luckily it wasn’t the other way around.

The date is also quite significant for our South African heritage. We celebrate this day every year on the December 16. It is called Day of the Vow. This already special day would now be more special to us.

After the big moment we actually had the photoshoot with an amazing photographer, Candid Chaser, who did a great job capturing the joy and love between us at that point. Still in euphoria we probably weren’t the easiest couple to work with but he somehow managed to channel all that energy to create a perfect shoot.

It was quite a coordinated effort with a lot of Aussies involved to create our perfect moment. It was a great experience and I would do it all over again if given the chance.

We are overwhelmed with all the love and support that we have received in this special time and Australia will definitely see us again.

Ms Floral Says: Wow Jan! What a memorable holiday! This is such an amazing proposal and the stories behind the art are so touching. We wish you and Megan all the very best for your future lives together. 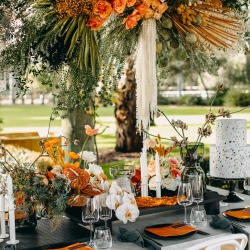