by Lisa Perkovic | Honeymoon Like a Local, Honeymoons, Location Australia

Let’s face it, your honeymoon planning might be looking a little bit different these days. It’s not quite as simple as hopping on a plane to Paris or booking a summer jaunt in New York City anymore. But that doesn’t mean you and your special someone can’t have a honeymoon to remember. We’re swapping out international hotspots for domestic must-dos.

Paris for Sydney
Planned on getting loved up in the City of Love? Drinking champagne under the bright lights of the Eiffel Tower, eating pain au chocolat at a cute café, perusing the shops for a few special pieces? Well, how about putting a Sydney spin on things? Spicers Potts Point sits on a leafy street back from the hustle of Kings Cross and is the perfect Parisian style pied-à-terre close to home. The Victorian terrace houses were transformed a few years back and are a study in soft whites, hardwood floors and high ceilings. Head just across the road to The Butler for cocktails on the terrace – Sydney Tower in the background (it’s no Eiffel, but hey it’s a tower!) and in the morning wander down the road for breakfast at Yellow. Très bien!

New York City for Melbourne
The shopping, the street art, the food – New York, we love you all year round. Just not right now. Soak up a little bit of Big Apple magic with a trip to Melbourne. Stick with us. Shopping. A big tick there. Street art. Graffiti laneways aplenty. Tick. Food. Tick, tick tick. And, you’re probably going to get better coffee. Zagame’s House burst onto the scene last year, converting a motel into one of the coolest boutique hotels around town. The location certainly helps; sitting on Lygon Street in Carlton, you’re surrounded by cafes and eateries, although with the 1851 Coffee and Kitchen and Lord Lygon Wine Shop both onsite, you don’t have to go far. Then there’s the bright pops of neon, the fun art pieces (say hi to the gold bullion-style bulldog on your way through the lobby), the super-size honesty mini bars in your room, and the industrial chic interior design – you might as well call this the Lower West Side.

Los Angeles for Brisbane
Yes, you did read that right. If you still thought Brisbane was a sleepy riverside city, think again. Sure, it’s a bold claim to say it can compare to the City of Angels, and the answer lies in Fortitude Valley. Yes, LA has a valley, but that’s not why. The reason is The Calile Hotel. While we weren’t looking, this 175 room hotel has emerged as a vision of green and white poolside umbrellas, polished concrete and a dreamy gold and pastel pink colour scheme. Did we mention the swaying palm trees? And the spa? Oh and there’s the award winning Hellenika restaurant on site – one of the hottest tables around town. No need for Hollywood Boulevard either – The Calile brings it to you, with the superstars of Aussie design lining the shops around the lobby. Think Camilla and Marc, Dion Lee, Venroy and Carla Zampatti. Treat yourselves to the Suite Dreams stay – Ruinart Brut Rose champagne in your room, $100 Lobby bar, late checkout, valet parking and turn down – the works!

Stratford Upon Avon for Launceston
Shakespeare fans out there will have this quaint English town on the top of their to do lists, and if you wanted your own Shakespeare in Love moment, consider heading to Launceston. Green rolling hills, winding river, cute Tudor style houses, crisp morning air – there’s a lot more parallels than you’d think. Base yourself in the Leisure Inn Penny Royal for a few days of fresh country air and cosy evenings. Located alongside the Tamar River, the hotel dates back to the 1840s, when it was a corn mill, before being relocated and rebuilt back in the 1950s. It’s still full of character, with the onsite Penny Royal Adventure Park hosting ghost tours and a live canon firing complete with costumed re-enactment to keep you entertained.

Florence for Adelaide
Dreaming of walking down the cobblestoned streets of Florence with your amore? Drinking Aperol spritz as the sun goes down? Well, The City of Churches might offer you more than just a slice of Italy. Base yourself at the Mayfair Hotel on King William Street, in a grand old dame building that has been transformed into a beautiful hotel. Make a beeline for the rooftop Hennessy bar, where there’s faux skin rugs on the floor, chandeliers on the rafters and great views out across Adelaide’s skyline. Then, in the morning, get in the car and head up to the Adelaide Hills. There might not be fields of sunflowers under a Tuscan sun, but there’s strawberry fields ripe for the picking, and plenty of wineries for you to stop in for a tasting.

Whether you want to sip cocktails under the sun, curl up in a bay window or soak up a pool scene, you can have that honeymoon close to home and not be disappointed.

Ms Floral Says: This is such a clever way to get a change of scenery when you can’t travel too far! Australia really has so much to offer honeymooners and travellers. Thanks Lisa! 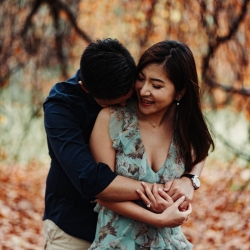