by Nick | Entertainment, Groom, Life As A Groom

This cool, funny and strangely romantic storyboard was created by director Nick as part of his wedding speech.

To be honest, the storyboard was my safety net.

I’m pretty comfortable in front of a microphone (don’t mind a Karaoke session now and then), and also pretty comfortable with my first joke being crowd pleasing – but I have a tendency whilst people are laughing to shoehorn in a totally inappropriate followup joke that leaves people slapping their foreheads, shaking their heads and saying – “not again Nick!”.

So whilst I was shooting a job in New Zealand I woke up at 2am and realised that I needed to give myself some parameters. Something to defer to, or something to keep me on track because I also have a habit of rambling. So I fired off a brief to my regular and amazing storyboard artist Maria Pena who lives in Costa Rica and we got to work. I sent her Facebook shots of my wife to be, our mates, the celebrant, the bridal party and any location reference for the real places that these “events” took place… and of course provided examples of my totes ripped and amazing body for her to sketch.

The night’s speeches were amazing, yet they all kind of had a similar central theme – “How the hell did Nick get Steff to marry him?”…. and “Nick’s funny – but he’s a bit fat”. “Nick’s silly, but he’s hardly a stand up masculine man who can change a tyre?”. It was part wedding, part Nick roast – so in essence, with me having the last speech of the night it couldn’t have been set up any better.

No one, including my wife obviously knew what I had in store, and I think people were kind of expecting some kind of song and dance from me – but this took them all by surprise. Essentially I took everyone through the courtship, engagement and wedding day as part movie pitch – and part explanation to everyone that this marriage is the result of a one-night stand that’s been going on gleefully for 6 years now.

I can’t remember making the speech, I can only remember seeing people laughing so I figured it was working. I saw my wife crying (I assume with laughter but easily could’ve been horrible embarrassment) – and I figured I’d done alright.

There’s been heaps of comments since, and I still get them now from guests who have told other people of the story of the speech. It’s kind of weird, I never really expected it to be such a hit particularly given that it was only designed to keep my radically inappropriate humour in front of my grandparents to a minimum.

But I guess, the not so subtle metaphors of fireworks going off, geysers shooting, rockets launching, volcanos erupting and trains entering tunnels did the job.

I asked my Grandfather what he thought pretty much straight after the speech. He flicked his hearing aid back on and said “people seemed to be enjoying it”.

Ms Gingham says: This storyboard was shared with us by the very generous Nick but a very special thank you goes to Nick and Steff’s awesome wedding photographer Todd Hunter McGaw who very kindly got us in contact with Nick. 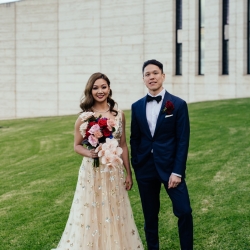